Imaginary friends are common for kids, but would you totally freak out if your child's pal only came to visit at night? 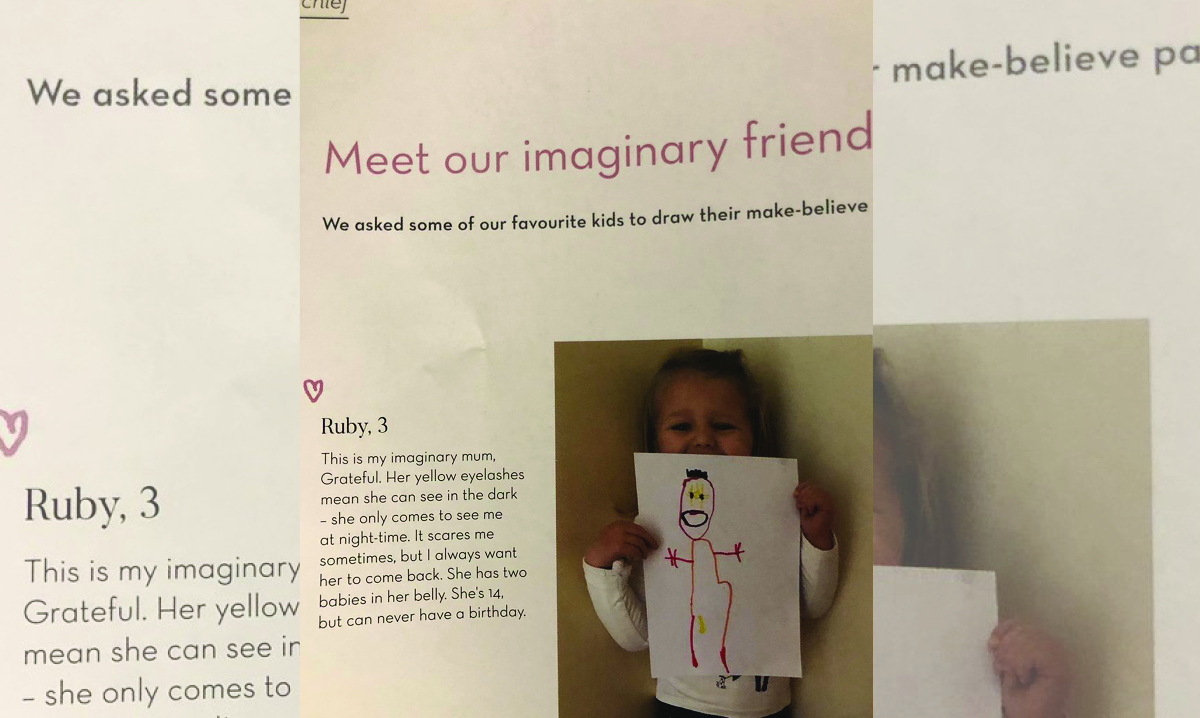 I had four imaginary friends as a child: Touchy, Marla, Kelly and Julie. Don’t ask me where the names came from (I did end up with a Kelly and Julie as real friends, by the way). All I know is I had four of them, and they were my made-up besties.

It’s not surprising that I had a few imaginary pals. I am the baby and the only girl, and I was really shy as a kid – well, until I hit middle school; then I lost my ability to shut up (but that’s another story). So, while I wasn’t keen on talking to too many people, I had my main imaginary homies to pal around with.

Aside from the one time I told my mom to put one of my “friends” in the shopping cart before me, I don’t really remember much about my encounters with them. And I definitely don’t recall them visiting me in the middle of the night – like this 3-year-old girl named Ruby.

Ruby and her imaginary friend became a topic of conversation on Twitter thanks to actress Natalie Morales, who shared a photo of the little gal and a drawing of her “imaginary mum, Grateful” (the image and description seem to have been pulled out of a magazine of some sort). Morales is convinced Ruby has a ghost – and I’m convinced, too, after reading Ruby’s description.

Of her imaginary mama, Ruby says, “Her yellow eyelashes mean she can see in the dark – she only comes to see me at night-time. It scares me sometimes, but I always want her to come back.”

Uhh. Why does she want her to come back? Why?

Grateful also has “two babies in her belly” and she’s 14 years old – oh, and she “can never have a birthday.”

Why can she never have a birthday, Ruby?! Why? Is it because she’s dead?!

This kid is totally channeling Haley Joel Osment in The Sixth Sense – and it’s creepy AF. But, as this Reddit thread shows, kids say, see and do all sorts of creepy things. Take QuagmoreDP’s story:

“While changing my daughter in front of the open closet door, she kept looking around me and laughing. I asked her what was so funny. She said, ‘the man.’ To which I replied, ‘What man?’ She then pointed at the closet and said, ‘The man with the snake neck.’ I turn around and nothing was there. I’m afraid to look into the history of my house to see if anyone hung themselves in the closet. At least she wasn’t scared.”

She may not be scared, but I am! I would be selling that house ASAP.

Has your kid described their imaginary friend this way or said they’ve seen something in your home that has creeped you out? Tell us in comments.