Co-Sleeping with Tweens: Should Bed-Sharing Have an Age Limit? 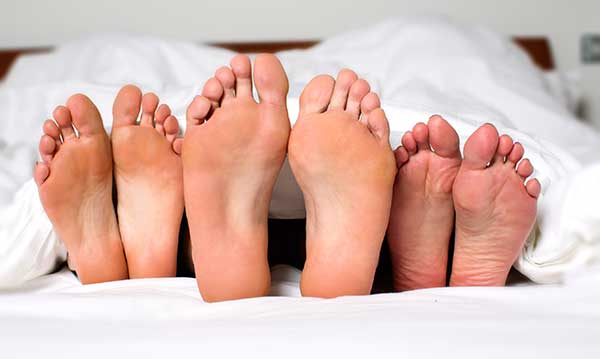 A mom in England made headlines last month because she still co-sleeps with her tween-aged boys while dad sleeps in a separate bedroom.

Mom-of-two Julie Darby says her sons Kai, 9, and Brayden, 10, have been thriving under the arrangement for five years after previous attempts to transition them to their own beds when they were younger had failed, she tells the UK Mirror.

Her husband is fine with it, too, and she points out that they make time for intimacy when their kids are at school or away at a friend’s house – but that doesn’t stop the criticism.

“We’ve heard it all. We’re ‘spoiling them, we’ll make them too attached, we’ve made a rod for our own backs.’ Right from day one people were telling me I was doing everything wrong,” Darby, of Derbyshire, England, told the Mirror. “But our happy, healthy sons are proof we’ve done what is right for our family.”

And isn’t that what counts? Apparently not. The Darby family’s co-sleeping story has more than 3,700 shares – no doubt for the apparent ‘shock’ appeal of the subject – and the fact that it was published in the first place sends a message that doing what’s best to meet your children’s unique needs is somehow open for debate.

Some commenters on The Stir blog about the story voice support for the family while others call the arrangement “lazy parenting” and even unhealthy for the boys.

Whether or not co-sleeping with older kids is right for your family, there’s nothing unusual or perverse about bed-sharing with your children and some experts say it may be beneficial (keeping in mind, of course, safety precautions for bed-sharing). Even Angelina Jolie was quoted years ago talking about “family sleep” and how her six kids (then ages 1 to 8) would frequently all pile into bed with mom and dad.

Darby says she plans to stop co-sleeping when her boys are around 12 to 13, but who’s to say she should? Is there some definitive age when co-sleeping is no longer OK? These kids have the option of their own, private bed should they choose to use it and chances are they won’t need prompting when the time is right.

As for her relationship with her husband, I find it unfortunate that she has to answer to onlookers about when they make time for sex. Sleeping in the same bed says nothing of a couple’s intimacy and no one seems to ask that question of other parents – probably because it’s grotesquely inappropriate to ask of anyone.

And while she certainly needs no further “reason” to co-sleep, Darby shares that she struggled with infertility before getting pregnant and then lost her first-born son at one day old. She and her husband vowed to be the best parents possible, and that included not sticking with popular “cry it out” advice when her boys had trouble falling asleep without mom near.

The space between family members seems to be ever-growing with trends toward larger homes with more bedrooms and bathrooms, finished basements so everyone has their “own space,” demanding work/homework/extracurricular schedules for even the youngest members of the family and our general obsession with staring at our phones instead of being present with people. Letting kids sleep in your room might seem like “giving in” to their wants, but isn’t it possible that your children actually need this time with you if they’re asking for it?

I’d love to see the people who have time to judge non-harmful things like co-sleeping get riled up about some of the real problems that affect children and families, but in the meantime I hope they’ll at least be mindful of who’s listening to their judgments. If you talk about how weird it is for kids to sleep with their parents, will your child feel comfortable coming to you at night when they’re scared or not feeling well? Will your kids go to school and make fun of the boys and girls who sleep in their parents’ room?

It’s a sad reflection on our society when headlines about co-sleeping are more shared and talked about than the things we see every day that actually are shocking and awful. Think co-sleeping is bad? Before you sound off at a friend or family member, consider putting that energy to use where it’s actually needed: perhaps advocating for children who have no place to sleep, children from families where there’s real abuse happening at home, children who can only dream of the sort of family that’s so close-knit that they sleep together.

What do you think? Should co-sleeping have an age limit? Tell us in the comments.