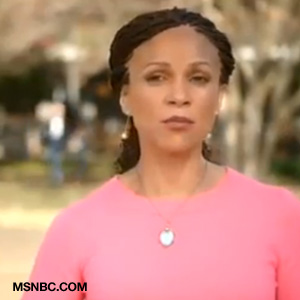 Wanting all American kids to have access to good education, tools for success and equal opportunity: Sounds good, no? Could depend on how you word it.

That might have been the message of Melissa Harris-Perry, a progressive political pundit on MSNBC, in a recent TV spot that's drawn some big backlash. That's because, in the process, she took square aim at our culture's "private notion of children"

"Your kid is yours, and totally your responsibility," she says in the 31-second network commercial, which was promoting her weekend show. "We haven't had a very collective notion of 'these are our children.'

Not so fast, countered a wave of high-profile personalities, including conservatives like Sarah Palin, Rush Limbaugh and Glenn Beck. They feel Harris-Perry's comments encourage a lack of parental accountability, too much government involvement and, in a few stronger-put views, a communist agenda.

But high-profile politicians and pundits aren't the only ones upset about Harris-Perry's comments. Ordinary folks filled up web articles' comment sections, too, to voice concerns.

Yet others disagree with the contention that, as one news commentator put it, "she's passing the buck to Chairman Mao." They're saying Harris-Perry's comments are being taken out of context, and agree with her sentiment that wider involvement is key to kids' futures.

"She thinks the entire community should do their part to help children – I take this to mean police, teachers, neighbors and all adults who come in to contact with children," Merlinxlight commented on a Fox News article. "I don't see one mention of the government. She is saying adults in the community need to be responsible when children are in their care, regardless of whether it's their kids or not."

As for Harris-Perry, she's stood by her comments, adding, according to Huffington Post, "I believe our children are not our private property. They are not just extensions of ourselves." She even had an on-air laugh over how much coverage she got on Fox News (just over an hour – vs. the four minutes the promo aired on MSNBC) recently on All In with Chris Hayes, another MSNBC program.

"The thing that's worth asking the question about is, well, why?" said Harris-Perry, who's also a political science professor at Tulane University in New Orleans and mom to a daughter. "I don't think it's about hating.

"I do think there is a central question here about what we think of as negative and positive freedoms" – freedom to, or not to do, something, she explains – and "that is an old debate and a worthy debate."