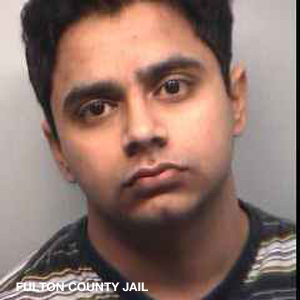 Remember when you got a poor grade in school – and feared taking the report card home to mom and dad? Maybe you tried to be clever a time or two and penciled-in a new and improved grade to dupe the 'rents (ah, the days before digital progress reports).

But surely, you didn't go quite as far as 19-year-old Aftab Aslam did. The Georgia Gwinnett College student, who was failing English for a second time, was so afraid to tell his parents about the bad grade he actually faked his own kidnapping to avoid spilling the news about the "F" he received.

Yep, that's right. But how exactly did Aslam stage his own kidnapping? Here's how it went down, according to reports that just came out in the past few days. Aslam was reported missing around 10 a.m. April 27. He bought an inexpensive prepaid phone from Target to text his parents pretending to be his kidnappers, telling them that if the police were called, he would be killed, according to a Newser article.

After receiving the text, Aslam's parents did what any parents would: They called the police. The FBI began to search for the "missing" teen. Once police learned that Aslam himself bought the phone and sent the text, the case became a missing-person investigation.

Then on May 5, Aslam returned home on own accord, according to the Johns Creek Patch in Georgia.

Think that was the end of this mess for Aslam? Think again!

Aslam's first story to police was that he had been taken and drugged, Newser wrote, but later, Alsam came clean with the truth. Which was: He camped out in a part of town that was less developed, and he came home because the weather got bad, police said.

Staging your own kidnapping is a drastic measure. Some people took the side of the student, though, and criticized the teen's parents.

"This kid must have felt real terror of his parents to go to these lengths," commenter fractal commented on the Newser article.

"He must have been pretty afraid of his parents," agreed Rachel Abraham, a poster on a The Stir article. "Sometimes saying 'I'm sorry and I need help' isn't possible. If his parents could lead him to do something that crazy, he needs to cut them out of his life."

Others thought Aslam made a stupid decision by staging his kidnapping.

Commenter Rach, on The Stir, said, "This isn't a kid, this is a grown man – and he should be punished like he's a grown man."

One thing's for sure – if Aslam thought an "F" was bad, one misdemeanor and multiple felony charges is just a tad worse, dont'cha think?