Comedian Pretends to Accidentally Kill Son as a Prank 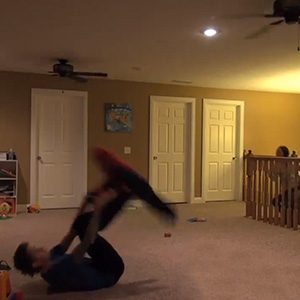 We've heard of putting Nair in the shampoo to prank a friend or family member, but "killing" your kid for laughs is a new one.

One look at Roman Atwood's YouTube channel, Roman Atwood Pranks, and you can see that the man behind the camera has a knack for making people laugh.

The child's mom, however, wasn't laughing when Atwood pulled a prank on her that involved their son, a staircase and the potential for bodily injury, as you can see here on this article from Opposing Views.

Let us set the scene for you. Mom comes home to dad playing upstairs with their son – who is dressed like Spider-Man. Unbeknownst to mom, their other son has hidden a dummy in a Spider-Man costume in the room next door. Mom checks out the game and heads downstairs to get Atwood some water, just in time to hear dad ask his son if he'd like to fly.

Then, they pull the old toddler/dummy switcheroo.

Mom heads back upstairs just in time to see the dummy topple over the handrails into the living room below. She frantically races down the stairs to what she thinks is her son, rips off the Spider-Man mask and freaks out when she realizes it was all a joke.

After a kick, a profanity or two and the demand Atwood sleeps on the couch, the video ends with some "background scenes" featuring one very relieved, but shaken, momma.

So far, the prank has reached almost 12 million views on YouTube and has generated mixed reactions among his fans – most of which slam the prankster.

In response to Atwood's prank, YouTube user Mo Adewunmi says, "You have a lot of immature fans willing to defend you to death. This prank crossed the line. Any parents' absolute worst fear is something happening to their child. You put your wife through a dangerous amount of stress for views. Not cool."

On the other hand, YouTube user Victoria Carson thought the prank was great. She says, "I thought this was HILARIOUS. Well done!!!! Funniest stuff on YouTube ever!!!!- "

The prank was a gutsy move on Atwood's part. How would you respond if you were pranked this way?

From boogers to pen caps, here's why some kids can't seem to keep strange and stomach-turning things out of their mouths.
Read more
Tweens & Teens

It's totally natural but can be an uncomfortable thing to address with your son. A local expert offers advice on how to handle boys' wet dreams.
Read more
Sponsored Content