Crotchless Panties for Sale at a Kids and Teen Store 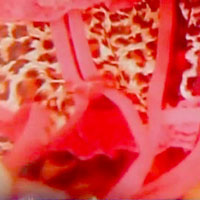 What's leopard-print, trimmed in hot pink lace – and crotchless? Pairs of thong panties – which were on sale at a Colorado shop called Kids N Teen until an outraged mom spotted them last week.

The so-called "kiddie lingerie" has had parents as slack-jawed as Erin French – the furious mom who spotted the undies. According to Colorado 9 News, Erin popped into the new store at a Greeley mall – nestled by the play area – with her young son. There, amid the "cuddly little stuffed animal backpacks" and "pretty little princess dresses," as she told the news station, were the offending skivvies.

"I was mortified," Erin said during her TV interview. So she did what any shell-shocked modern parent would: Whipped out her cell phone to videotape the merch – which also included purple and black lace varieties – displaying the distinct swath of absent fabric. "It's absolutely crotchless," she says in the background.

"They're sized to fit a 7-year-old girl," she told the station, standing outside her family's home. "That's just totally inappropriate."

The store, which had only been open a couple weeks, was pretty quick to pull the product, the report continued, after "a complaint from mall management." An owner, identified only as Kristina, told reporters that only about 25 percent of its stock is geared at teens, and that it's "still trying to figure out what to include as merchandise."

Maybe so. But "teens" is broad territory, including the underage 14-17 set. That's got plenty of parents baffled and fuming – especially due to the pint-sized cut Erin mentioned.

On Mommyish.com, Brittney summed it up this way: "There is no way in HELL this store should be selling those! If a 'teen' (18-19) wanted to go buy that, there are stores like Frederick's – not a store with 'kids' in the title. It's just sickening."

Over at Blogs.Babycenter.com, commenter Bobbi H. says to consider the market.

"Moms and dads and grandparents aren't buying these things. Teenage girls who want to 'act grown-up,' who have jobs or allowances, are. They think they're 'sexy.' They buy them as a 'joke.' They buy them because they can, and they know their parents wouldn't approve. And they have serious purchase power. Kids between the ages of 11 and 17 have a higher disposable income than many working adults. It goes back to parenting our kids. We have to keep a tighter watch on what they're doing, how they spend their money, and keep the lines open."

A few disgusted kids are piping up, too. From Erin's niece, who told news crews "I don't know why they would sell those there," to 16 year-old Kayla, who chimed in on Mommyish.com: "When I showed it to my friends, they were shocked. Why do grown-ups have to ruin stuff like that?"

It's a question store owners aren't exactly answering. But Erin has her opinion.

"There is one purpose for an item of that nature," she said. "That is not something that we want to encourage for our young girls."

And, as a mom named Jill put it on Blogs.Babycenter, "Yikes. And ewww. I'm just thankful my kid still gets excited about 'day of the week' undies."

Brought to you by Academy of the Sacred Heart.
Read more
Macomb County Activities