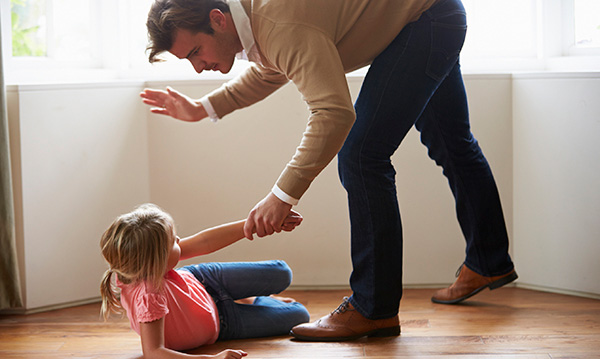 We've heard of some pretty strange calls to the police – but calling for backup to a spanking is new one.

When Okeechobee, Florida dad Dale Garcia returned home last week to find that his two 12-year-old daughters were fighting, he decided some discipline was in order. He feared, however, that false accusations could be thrown around if he spanked his child – so he called the cops and asked them to send an officer to witness the punishment, according to local WPTV of West Palm Beach.

Let us set the scene Garcia walked in to. Imagine coming home to hear your tween girls arguing. You walk into the house to find one has locked herself in her room while the other is picking the lock with a knife.

Depending on where you stand on the whole spanking debate, one or both daughters might be in need of little tough love. That's the conclusion Garcia came to and decided the girl that brought a knife into the mix deserved a spanking.

Floridians are allowed to spank their kids, notes News 96.5, a station out of Orlando, but they must do so within reason: no broken bones, cuts, burns, scrapes or other injuries, it notes, citing the state's civil code. But a smack on the bum appears to be OK.

But the daughter "told him it was against the law for him to hit her," USA Today Network reports. So, to avoid any nasty consequences, Garcia called the local police to tell them of his intentions and asked that an officer be sent out to witness the punishment.

A deputy did come to the house, watched the father spank the child four times, WPTV reports – and then left. The official later filed a report that stated, "Since no crime had been committed, this case is closed and no further action is required."

Believe it or not, this isn't the first time the police station has received similar calls from parents looking to discipline their kids, according to Noel Stephen of the Okeechobee County Sheriff Office – who told USA Today Network he's heard of it happening 12 times in his 28-year-career – and only when there aren't more pressing calls to handle, WLWT5 of Cincinnati notes.

Though corporal punishment of kids is a hot topic, most parents aren't so keen on the idea of calling the cops every time junior needs a pop on his bottom.

"Outstanding! Good for the father," Bernie Misiura comments on the USA Today article. "This is the nonsense and indoctrination that they are teaching our kids in school. It is a shame that parents feel the need that they have to waste the time of the police just to be protected in this world gone crazy."

Others, however, are on the opposite end of the spectrum and think that dad and officer were out of line.

"I think this officer and father need paddling," Coleen Albone Fuller writes on the same story. "There were other ways of handling a matter with children than hitting. Very upsetting that people here cheer for a child getting hit. Freaks."

So where do you stand? Should parents be able to spank their kids whenever they feel the need, should they have backup when doing so – or should we just do away with this form of punishment all together?