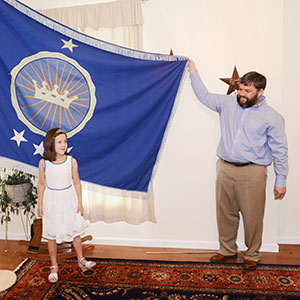 Kids have all sorts of requests for their parents: toys, clothes, candy, etc. Whether you get these items for them or not, they are attainable. But normally, when your kid asks you if she can be a princess, you can't really fulfill that wish – can you?

Our first thought can be perfectly described by Washington Post commenter SFONCLT: "Wth? This must be from The Onion or something. No way this is real!"

When Heaton and his daughter, Emily, were playing at their home last winter, she asked if she could be a princess. Heaton, wanting his children to know that he would "literally go to the ends of the earth to make their wishes and dreams come true," decided to make Emily's wishes a reality.

He researched unclaimed land all over the world and was granted permission from the Egyptian authorities to travel to the area he chose, which is an 800-square-mile patch of arid desert, the Washington Post reports.

"There, on June 16 – Emily's seventh birthday – he planted a blue flag with four stars and a crown on a rocky hill," the Post notes. "The area, a sandy expanse sitting along the Sudanese border, morphed from what locals call Bir Tawil into what Heaton and his family call the 'Kingdom of North Sudan.'"

Here, Heaton is king and his daughter is the princess. According to ABC News, Heaton requests that people refer to his daughter as Princess Emily, which is her official title.

"While Emily is already sleeping in a princess bed and being addressed as 'Princess Emily' back home in Virginia, whether the Heatons can actually lay claim to the land is up for dispute," ABC News reports.

Heaton will have to obtain permission from neighboring counties or the United Nations in order to gain actual political control of the area, which has a population of zero, according to the Richmond Times-Dispatch, which covers the Heatons' home state.

"That's the exact same process that has been done for thousands of years," dad told the Times-Dispatch. "The exception is this nation was claimed for love."

Time will tell what happens with this land. For now, commenters are giving mixed reactions. While some say he's giving his daughter too much, others are focusing on the land itself – and how his plans to turn it into an agricultural production area, as the Post notes, could be a good thing.

Honestly, I think this dad is insane. Most little girls – myself included at that age – want to be princesses. They get over it. So Heaton should have just let this princess phase play out.