An Oregon father of three got some dirty looks at a farmers market for walking his daughter on a leash. So he took to social media to express his reasons. 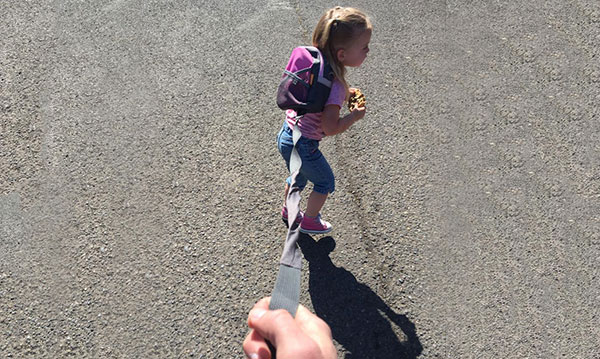 Anyone who has kids knows that their minds move extremely quickly. And, sometimes, their bodies move quicker.

In the blink of an eye, children can go from one side of a room – or a grocery store, amusement park or beach – to the other. It’s sometimes tough for parents, especially those that have multiple little ones to keep an eye on, to keep track of their little speed demons at all times.

One Oregon dad has a solution to this very real problem.

Clint Edwards, author of the No Idea what I’m Doing: A Daddy Blog, keeps his 3-year-old daughter, Aspen, on a leash while at any large-scale public destination.

The father of three decided to take to social media to discuss his reasoning for using a leash after receiving dirty looks while at a local farmers market.

“We were at the farmers market. No shame. I put this kid on a leash,” his Facebook post begins. “She’s a wild child, and this thing has already kept her out of the road and from sticking her hand in an ice cream machine, along with keeping me sane.”

He knows that other parents judge him, but he also knows that if he lets her roam free, she will be “the lost child announced over the intercom,” he says.

Edwards knows that his daughter’s mind moves at the speed of light, he continues, and her curiosity quickly takes her from one place to the next.

“I can’t, for the life of me, keep her from moving,” he says. “Her curiosity is incredible, and for only having a 12-inch stride, she moves faster than any Olympian.”

Edwards acknowledges that Aspen’s predisposition to dash is fleeting, so to say – and that she’ll soon learn she can understand the world without having to run toward and touch everything in sight.

“But until that day comes,” he declares, “I’m going to do whatever I can to keep her out of danger, even if it means a leash.”

“I had two wild children,” says Michael Erickson on the post. “Never would I put my child on a freaking leash. Don’t try to change your child – change your parenting skills! If you can’t control your child at all times, then you’re not the parent you need to be.”

Others were more supportive.

“Our first son was always moving,” says Janie Jeter. “We got him a harness and a leash. He loved it. No more strollers or trying to hang on to his hand. And he managed to survive his toddler years. He’s now a 41-year-old father.”

Edwards, meanwhile, is taking it in stride – and clinging firmly to that leash.

Do you ever keep your kids on a leash? Do you judge others who do? Tell us in the comments.