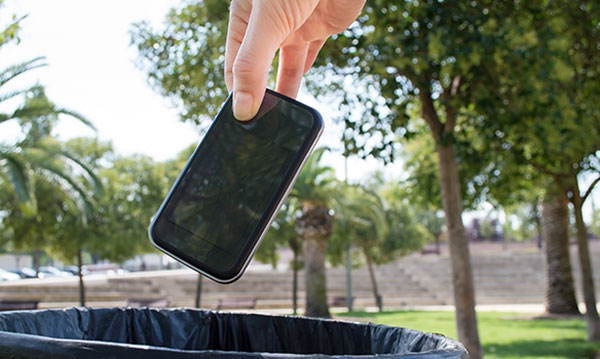 You would do pretty much anything for your children … right? Standard parental sacrifices include staying up all night monitoring fevers, snack duty for the soccer team and helping build a model solar system the night before the science fair. Now that list also includes dumpster diving for your child’s smartphone – thanks to Craig Roncace.

When Ethan, Craig’s 13-year-old son, accidentally threw away his phone at school, Craig wasn’t going to let this slide – or rather, be incinerated. Thanks to a phone-tracking app, Craig found the phone at a waste-to-energy facility in Camden, New Jersey, Inside Edition reports.

Dad retrieved the phone in the nick of time, too: Facility workers were just about to dump the truckload of trash into a 50-foot-high and 260-feet-long garbage pile, NBC 10 reported. Craig “suited up” and found the phone in 30 minutes and in working condition – so thankfully he didn’t get his hands dirty for nothing.

“I didn’t really think this was actually real,” Ethan said in the NBC report. “I just thought it was in the movies.”

The original report didn’t clarify whether Ethan tagged along in the initial dumpster dive. That left some readers outraged.

“The kid should have done the digging,” Jojo from San Francisco said on Daily Mail. “All the digging.”

Having a cell phone is a huge responsibility for kids. Giving your tweens their first mobile should be a big milestone that shows your trust in them as young adults.

Accidents happen, sure, but Ethan’s irresponsibility was an opportunity to learn a lesson in the value of things. Some readers think dad indeed taught a valuable lesson in this age of “new is always better.”

“Yes, I read how cheap phones are, but not everyone can afford a new phone,” Suzi Bay from New York said on Daily Mail. “This father has taught his son a valuable lesson in life and that is that not everything is disposable.”

But Sour Pickles of Boston suggested a different lesson: no phone. “Not unless he earned the money to buy a new one. The lawn needs mowing, kid, and my car needs washing.”

Others commiserated over the cost, though. “I buy my phones instead of financing them or getting locked into two-year contracts with a provider, which means about $650 for a new phone,” Joearch said on NJ.com. “I have no qualms about doing a little dumpster diving for $650.”

So sure, Craig may have saved a couple hundred dollars and risked picking up a couple of diseases along the way, but if nothing else, he proved his unconditional love. At least his wife, Deborah, felt that way, declaring on Facebook, “Craig was the hero of the day in Ethan’s eyes.”

All we’re saying is, he’d better get an extravagant gift this Father’s Day.

Does a parent’s love extend to getting down and dirty at the dump? Did Craig teach his son a valuable lesson – or not? Let us know in the comments below.