A dad of two glammed it up in some 'maternity' photos – striking poses and pouty faces – all in hopes of getting a laugh. We'd say he succeeded. 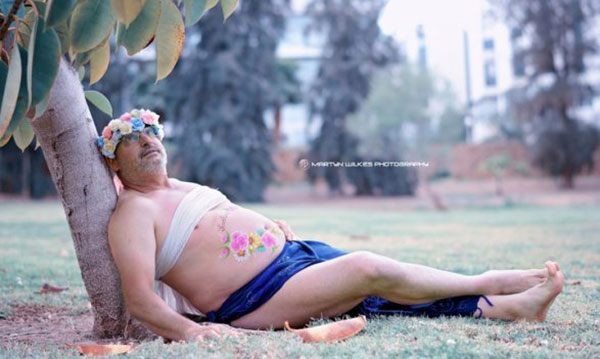 Spanish photographer Martyn Wilkes and his buddy Francisco Perez – better known by his friends as Paco – decided to shoot a maternity photo session with Paco as the mother-to-be. And the end result is hilarious.

Just take a peek at the photo above.

It’s too funny to see Paco stroll through the Andalusian countryside, flower crown on his head and draped fabric in tow.

You can check out the entire album on Wilkes’ Facebook page. The description of the album reads, “The most precious thing in this life is to give life, to pass on our beauty … to experience the most amazing gift given to us by Mother Nature. Paco is expecting a beautiful baby girl called Noelia, with only 5 weeks left to go, his dream of becoming a father is finally coming true.”

What’s the scoop behind the photos?

Wilkes told The Huffington Post that the idea came to him because he had been doing a lot of maternity shoots and wanted to break up the monotony and have a laugh.

“I had been recently doing lots of maternity work, and I wanted to do something different to break things up and have a bit of fun,” he told The Huffington Post. “I have known Paco for four or five years and admittedly often jested about his rather large stomach, which resembled a pregnant mother.”

Paco, who was rewarded with beer for his time in front of the camera, clearly channeled his best Top Model poses – and commenters noticed.

Tyra Banks would be proud at Paco’s “smizing” aka “smiling with your eyes.”
Perhaps most hilarious is Paco’s total commitment to the shoot, as he strikes pose after pose and interacts with props.

Paco and his wife aren’t actually expecting, but the father of two grown daughters explained that the name “Noelia” painted on his stomach was an ode to the name his wife has decided on for their second daughter. However, on his way to the hospital, Paco made a few beer stops, which resulted in a poorly written “Noelia” misread as “Natalia.”

What do you think of this photo shoot? Did you laugh as much as we did? Tell us in comments.

The Jewish Festival of Lights runs Dec. 18-26, 2022. Celebrate it at one of these menorah lightings and Hanukkah happenings around town.
Read more
Sponsored Content