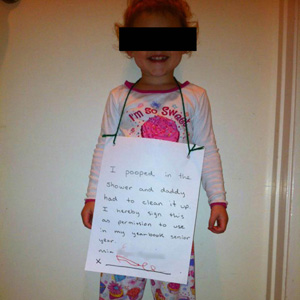 At least that's what one father learned the hard way after his daughter had an unfortunate accident of the No. 2 variety in the shower. Dad cleaned up the mess and decided to commemorate the incident with a photo featuring his very pleased 3-year-old daughter, Mia, holding a sign that reads, "I pooped in the shower and daddy had to clean it up. I hereby sign this as permission to use in my yearbook senior year."

An interesting choice, certainly, but it wasn't until he jokingly posted the photo on Reddit captioned by "She's so proud of herself!" that the public outrage began. Some commenters chuckle along with him, relating to the poopy situation. Kirktacular6 comments "As a Dad, well played sir. Well played" – and others like MissPrettyDMV tell naysayers to "Lighten up."

However, for many people, this dad's sense of humor stinks. Hollywoodlife blogger Bonnie Fuller could find no humor in the situation, calling his actions "emotionally abusive."

" … A parent does not expose his or her child to ridicule like this. This father needs major therapy and parenting skills."

Others are even more upset, calling father dearest " … one sick piece of crap," or worse – some going as far as suggesting child services get involved.

While the now-repentant father claims this photo wasn't meant to be a punishment – that he was just "making light of a messy situation" – his tactics follow a new "shaming trend" emerging from our tell-all internet culture. Reports of public shaming as punishment have been popping up in the news across the country, from the Illinois dad who made his daughter wear an "I like to steal" sign in front of her school to North Carolina's gun-toting dad who posted a video of himself emptying his .45 into his daughter's laptop to teach her a lesson. Even courts have been handing out public humiliation punishments, reminiscent of being locked in the stocks of the old days.

In this case, little Mia certainly isn't being forced to wear a scarlet letter; however, posting this photo publicly, without obscuring her face in anyway, isn't quite the same as shaming Fido for eating toilet paper. Accidents happen when you're a toddler, but nobody enjoys reliving those embarrassing moments (trust me, my dad still likes to bring up the notorious Disney Dumbo ride incident of 1991). But as inevitable as toddler toilet trouble is, so are parenting mistakes. And that's what this will boil down to – a small skid mark on an otherwise seemingly good parenting reputation.