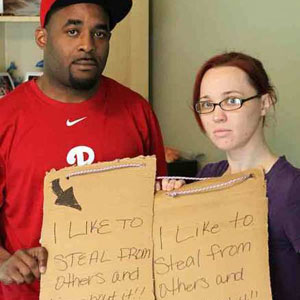 Photo courtesy of the Belleville News-Democrat

Some dads seem to have a thing for embarrassment when it comes to grounding their girls. Here at Oh, Mother, we've riffed on the Washington dude who dueled his daughter for hours (literally) – and, of course, notorious laptop-shootin' 'Facebook Parenting' father Tommy Jordan. Whether you agree with their tactics is another story.

For your consideration, this week, we offer Montrail White of Illinois and his daughter, Amiyah, age 8. Fed up with his kid's misbehavior, White scrawled two crude cardboard signs that both read, "I like to steal from others and then lie about it!!" He then made his kid wear the sandwich-style sign outside of her Swansea elementary school – as hundreds of parents and kids were arriving on a Tuesday morning, the Chicago Tribune noted.

Cops were called to the scene because White uttered expletives some 15 times in front of students, the school superintendent told the local Belleville News-Democrat. He was allegedly parked nearby and hollering at his "screaming and crying" child to be quiet (dad denies the profanities).

For his part, pops has been pretty open about his reasons, even posing for newspaper pix with both the sign and his wife, Melissa (who seems to have been in agreement).

"We tried different ways to discipline," dad told ABC 2 News of Baltimore. "Taking away TV – all different type of things. This is kind of like the final straw."

Her repeat crime? Regularly swiping "items at home" and, once, "Halloween rings" from a teacher's desk, the News-Democrat said.

"Is it more embarrassing to her to let a few people see her now," he told the paper, "or have her name in the newspaper when she gets older and is caught stealing and sent to jail?"

While the punishment's drawn backlash, it seems there's a growing chorus of folks who agree with White.

"In a moment when so much else in life is lived out loud and in public," The Huffington Post opined, "it would follow, in a backwards and disjointed kind of way, that the method of discipline as old as The Scarlet Letter would seem fitting in a modern age."

In that spirit, little Amiyah's piped up herself.

"I care about everyone and I'm a good girl," she told 5 KSDK in Missouri, wearing a bright orange shirt and smiling shyly. "and I do everything I can and every time someone's hurt then I will tell someone.

And, she level-headedly concluded: "He did it because he loved me and he doesn't want me to end up in jail when I'm older. He wants me to have a good future."

As for the sign? It's reportedly still in the family's home as a reminder – and, dad says, there to use again, if needed.