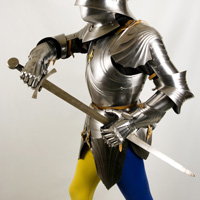 For most teens, a little live-action role playing, a la Dungeons and Dragons, is harmless stuff. And prithee: Who doesn't enjoy a rousing Ren Fest joust? All merry fare, surely.

That is, till one burly, bearded Washington dad transformed these typically tame games into a real-life two-hour battle back in October – waged against his daughter, who's 16.

That father, 38-year-old Freemon Everett Seay, wound up facing charges of second-degree assault with a deadly weapon, according to Washington-based publication The Olympian. Specifically: The girl allegedly was forced to don "armor" and a helmet, given a wooden sword and made to fight her dad for two hours – until she collapsed from exhaustion. That was after pops reportedly made the kid gather a bunch of willow branches from outside and beat her with them – "on the back of her legs and back, while she was on her stomach and he sat on top of her," Lt. Greg Elwin of the local county sheriff told The Olympian.

"She's 5 feet tall and not very heavy," Elwin told CBS News, "and he's over 6 feet tall and 300 pounds and a trained Renaissance fighter."

This was reasonable in Seay's eyes. Apparently, he argued that "she's 16 now, so we can fight to resolve these things," ABC News reported.

And you thought you were tough on your kids. That was Seay's official story, by the by: That he was disciplining his daughter.

For what, exactly? According to what Seay said in court papers, his child had been "'at a crack house' earlier that night," The Olympian noted. Other reports were more vague. Regardless, it seems the girl had traveled 30 miles from home on a Saturday night without permission, the Herald Sun said, and, after an unhappy daddy picked her up and drove her home, the battle ensued from about 2-4 a.m. on Sunday.

Afterward, the girl reportedly texted a friend who called for help. She also used her mobile to capture some pretty nasty bruises she took to her face, torso and legs (you can see a couple of the images in the CBS vid). While the teen wasn't hospitalized, The Olympian added, the dad "reportedly told her he was sorry and 'he did not intend to go that far.'"

At last report, Seay and his wife, Julie – a daycare worker who reportedly was around but did not intervene, CBS said – were both up on assault charges. The pair was also has other kids, ABC added, "none of whom were placed into protective custody." The 16-year-old was staying with another family member.