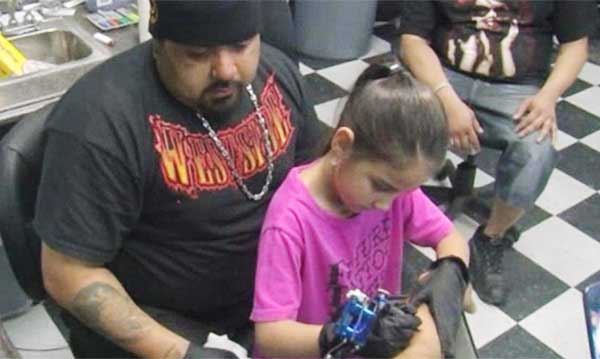 We just read about that dad who tattooed a photo of his infant child on his face and as we were searching around for more on this story, we came across something really cool from the vault of Internet articles.

Could you imagine walking into a tattoo parlor and seeing a kid doing a tattoo? Well, that’s exactly what you might find if you walk into the parlor of Patrick Gutierrez of Abilene, Texas. This dad and tattoo artist is teaching his princess, Alicia, his trade, the New York Daily News reports. And to be quite frank, she’s not bad.

Pops traded in his coloring book for a tattoo gun as a kid too, at just 14 years old. His goal is to have Alicia tattooing by about 12, which is fast approaching, considering the pair were interviewed by Daily News back in 2013.

Back then, the future Kat Von D, was donning a “Future Tattoo Artist,” artist shirt and was all smiles as her daddy doted on his little girl, saying “If she keeps up what she’s doing now, she draws a lot and watches me a lot, so by the age of 10 or 12, she’s going to be pretty good,” Gutierrez told the New York Daily News.

The little artist then turned her concentration on her trade as she tattooed a flower for the cameras proving that she can stay inside of the lines, despite distractions like news filming crews and a buzzing tattoo gun.

Though we can see that some might be a tad uneasy about teaching such a young artist such a mature trade, the majority of feedback about this daddy-daughter duo has been positive.

“I know a lot of people think what this little girl is doing is wrong, but I think she is doing something she enjoys doing. No one is forcing her to be tattooing,” Daily News reader, HOTOMA091812 posted. The commenter went on to say that the young girl looks happy.

And we agree. This padre is embracing his daughter’s skill and training her to have a hobby, if not a career, that she can use to her advantage in the future and spending tons of time with her in the process, and we think that is pretty great.

We weren’t able to find an update on Alicia, but wherever she is and whatever she is doing, we hope that she keeps on doing what she loves, and that she achieves her dreams, whether they involve tattooing or not.

What say you Metro Parent readers? Is this dad nuts or is doing this parenting thing right – and would you let this kid give you a tattoo?