Dad Wants Disney to Recall 'Inside Out' Doll 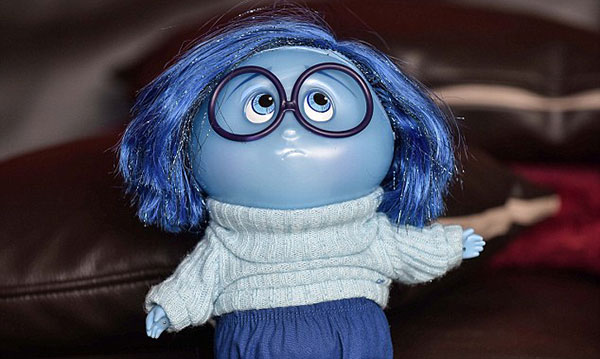 Kids often credit their parents with treating them like Martians, but I’d think the movie Inside Out – about the adversity the personifying emotions inside a girl’s head overcome to help the tween trump her anxiety about moving to a new city – would, if anything, offer a bit of sarcastic insight into the abrupt mood swings that poke the tender bits of children’s psyches.

Not for psychology student and father Andrew Smith of Dingwall in the Scottish Highlands. Last week, Smith bought his 11-year-old daughter Regan a Sadness doll – one of five characters featured in the film, including Disgust, Joy, Anger and Fear.

Upon squeezing the doll, she spouts what Smith claims are horrifying phrases for the tender ears of children. These “suicidal comments” include “Crying makes me slow down and obsess over the weight of life’s problems,” “Goodbye friendship, hello loneliness,” and Smith’s absolute least favorite: “I’m in an emotional slump – my legs don’t work. Just give me an a few hours,” Inquisitr notes.

But I have to tell you, when I was young and significantly more impressionable and my battery-operated Barney the dinosaur used to say “I love you” whenever I’d give him a tight hug, I never did believe I was a member of a happy, sing-along dinosaur family.

Is debilitating sadness less fantastical than dinosaur love? Sure. But for Smith to presume that Disney can mass market depression through plush dolls does a grave disservice to kids’ intellect and, frankly, his own parenting.

Smith branded the phrases “toxic” when he contacted Disney, urging them to recall the doll.

The Disney spokesperson replied seeing the movie should put the doll’s phrases into context, and added: “At the end of the movie it is Sadness who saves the day. Sadness is pivotal to the happy memories that are created, as without her there can be no value to the feeling of joy”.

Still, Smith claims he’ll catch a screening of the film solo before he allows his daughters to see the movie, according to the Mirror.

“I suppose I feel like a bit of an idiot because having spent the whole year learning about promoting mental well-being, to then go out and be caught out by Disney of all companies was a bit surreal,” he tells the Mirror.

While Smith may be abusing his textbooks, his underestimation of Disney is the real madness culprit.

No one’s lining up behind Smith to bash the corporate giant over the depressed doll – but parents have expressed another concern with the movie’s characters. Joy, the only happy and really positive character is chic, thin and glowingly white, while all the other characters are various colors and stout.

“You could say it’s supporting the message of over-slim models, and adverts where everybody looks slimmer than is natural, which then becomes thought of as the happy ideal,” British child psychotherapist Dilys Daws tells the Daily Mail. “Children in general seem to think thinner is better.”

Disney is regularly accused of mansplaining, whitesplaining and thinsplaining its way to unparalleled, blockbuster success, then culturing its characters to appease critics while arguably duping ticket purchasers into catching movies that are simply savvier reproductions of the same dominant narratives.

What do you think? Just another children’s movie, or is Disney mass marketing more than just fairytales?

Photo courtesy of the Daily Mail