Monroe dad Steve Haddad wore a leotard and danced to Beyonce's 'Single Ladies' with his daughters – and we think it's parenting gold, despite what the haters say. 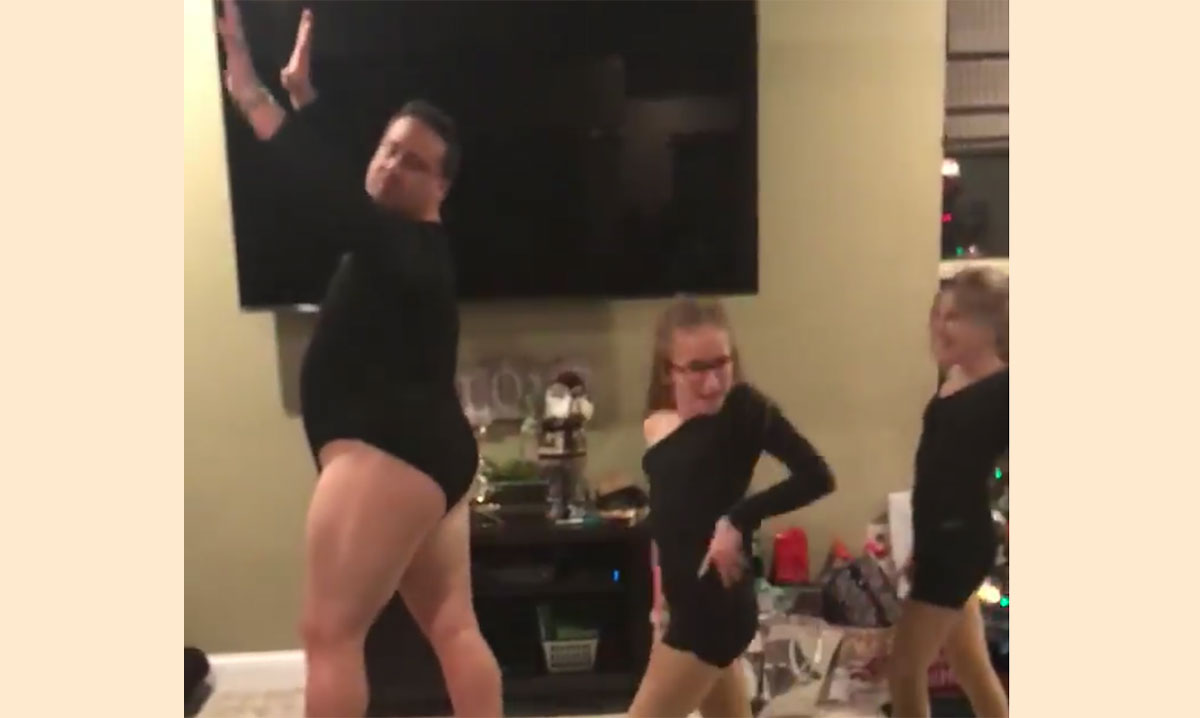 People take themselves too seriously. I mean, really people, it’s perfectly acceptable to do fun, silly or goofy things. After all, what’s the point of life if you can’t have a good laugh or two?

And yet some folks still feel the need to shame people for living life to the fullest and having a good time and some laughs with their family – just like Steve Haddad did. This dad in Monroe dressed up in a black leotard and danced to Beyonce’s “Single Ladies” with his two daughters.

It was part of the family’s annual Christmas lip sync contest. His wife recorded it and, judging by the huge smiles on their faces, both he and his girls seemed to be having a blast with it.

His wife posted the video to Facebook with the caption “Stay back girls he’s all mine…” and the hashtag “bestdad,” likely expecting to get a few laughs from her friends. Instead, the video blew up racking up more than 250,000 shares and more than 20 million views.

And, of course, as with most other viral video or post on the Internet, this harmless video of a dad having fun with his daughters has called the grumpy ol’ trolls out from under their bridges to comment on the dad’s appearance and his absolute gall for being a man willing to put on a costume and have a laugh – oh the absolute horror!

One user even thought it relevant to point out that “it’s a good thing” that the man didn’t have any sons because obviously if you’re a boy and you see your dad acting “unmanly” in any sort of way you won’t grow up to be a man … maybe you’ll grow up to be a Heffalump or something?

For the record, we don’t know if Haddad has sons or not, mom never says in the post, but we do know one thing – this is one awesome dad.

Most men can ejaculate and reproduce, with the help of a person with a vagina and a viable egg, and then walk away or foster no real relationship with their kids. (I like to call those types of people “sperm donors.”)

But it takes a true man to step up to the plate, put aside the toxic idea that man equals macho or “alpha” and parent his kids, which means not only discipline and guidance when needed, but also being silly and having fun.

Yeah, Haddad may have looked like a goof for a hot minute but those girls are going to remember the memories they’ve made with dad, like that one Christmas their dad put on a skin-tight leotard and shook his tail-feather with them, far longer than the child of the keyboard warrior is going to remember that one time their dad made fun of him.

File it under “I don’t understand” or “I don’t like it” in your head and scroll on – that simple act makes the world a little less cruel.

What do you think of Haddad’s video and what do you think of the opinions of the folks that had nasty things to say? Do you think that everyone should voice their opinion every time they have one or does that just open room for more hate? Let us know in the comments.