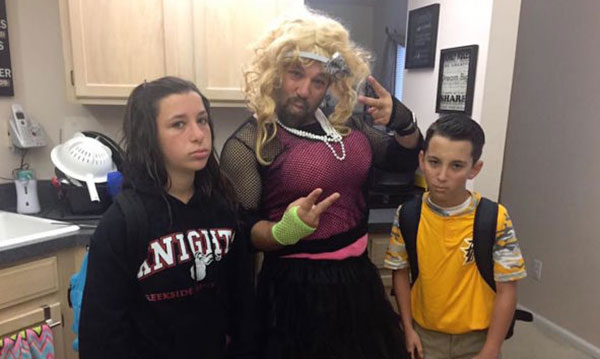 Tired of your kids ignoring quality one-on-one time in order to scroll through social media? Take this dad’s advice and strike a deal founded in embarrassment.

Bradley Herbst, a dad of two from Jacksonville, Florida, told the Today show that he set up this agreement with his daughter: If she used her cell phone in the car while he drove her to school, he would get out of the car while wearing whatever crazy costume he had on that day.

Luckily for us, the costumes are documented each day. Some of the highlights are Herbst dressed as Madonna, Elvis and a hospital patient having difficulty keeping the back of the gown closed.

Herbst told the Today show that his daughter, Sydney, was embarrassed by his normal choice of shorts and a T-shirt, so he decided to kick it up a notch to show her just how embarrassing he could be.

He says now that his antics have gone viral on social media, he’s been receiving suggestions for new costumes from fans of his constant costume changes.

“So I won’t ever run dry,” he says, but not before his daughter could get in a quick quip, muttering “sadly.”

Herbst told the Today show he dons the costumes for more than just a quick laugh.

“It’s hard with a 14-year-old to talk to them,” he says. “I mean, they come home, they’re on their phone. This is a way I’ve found that I get my time with my little girl.”

And while Sydney might act like she hates her dad’s embarrassing hijinks, she admitted to that deep down, she loves it.

So, if you see an influx of parents dressed as goofballs to drop off their children, you’ll know where the trend started.

Do you think the costumed dad is creating bonding moments with his kids? Or do you think there’s an easier way to get children off their phones? Tell us below in the comments.