This New York father just wants people to have the courage to be themselves, even if that means wearing summer gear in near-record low temperatures. 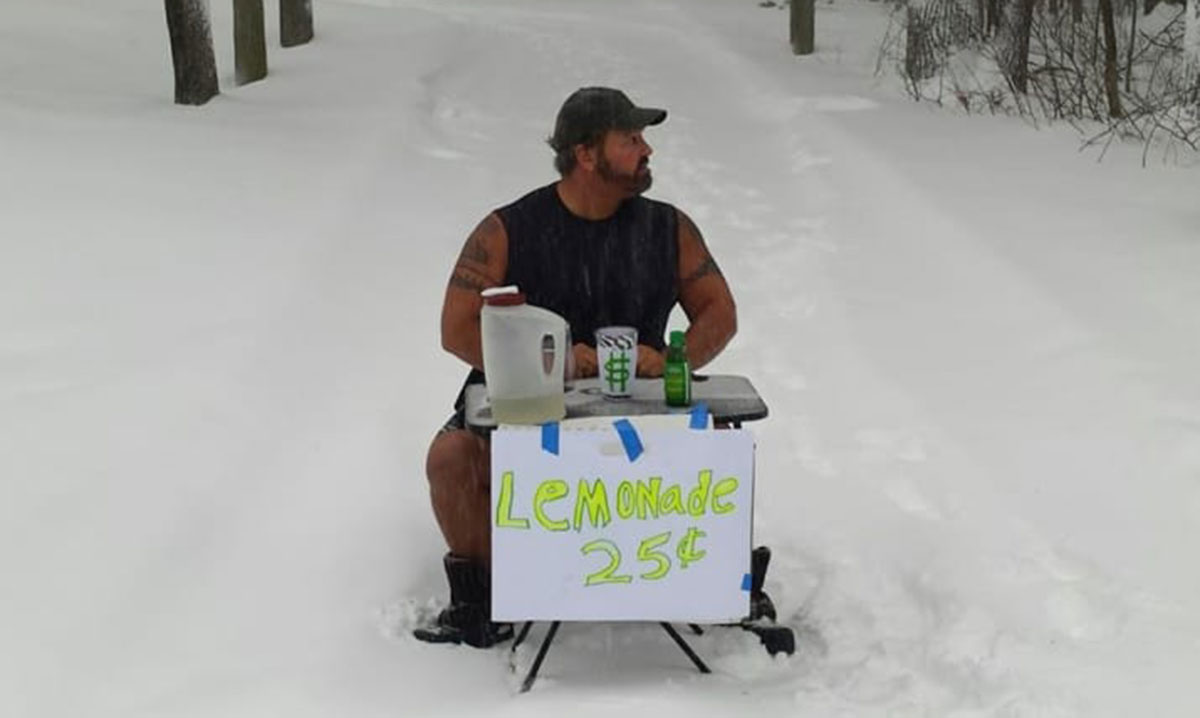 It’s not every day you see a burly dude in a tank top shilling lemonade in the middle of a snow storm. But it’s become a pretty common sight on one street in New York – and now, thanks to his kid posting it on Reddit, all over the internet.

This guy’s viral story is getting plenty of praise, too, BuzzFeed reports. For John Wolfe, a dad from Albany, this was his first experience going viral – although at the time he didn’t know if that was a good thing or a bad thing. It happened after his 23-year-old daughter, Mallory, posted a picture of him in near-record low temperatures selling not only lemonade but, even better, “hot tacos” in shorts and a sleeveless shirt.

Wolfe reportedly likes to see people’s reactions to his antics and gets a bit of a laugh out of it himself. It’s entertaining to him, he tells BuzzFeed, and that’s why he does it. Plain and simple.

Apparently, it’s resonated. Plenty of folks have commented on the epic icy shots and begged for more pictures of the dad doing other funny activities and poses. As luck would have it, he was totally game – and recruited his wife, trained body builder Lisa O’Donnell Wolfe, to stand in as photographer. She has become his biggest supporter and appears to have written back to almost everyone who’s commented on the BuzzFeed piece.

“John’s story inspires others and lets them know you can change your life around,” she replied to one supporter.

But John’s cold-braving antics aren’t the only reason readers are applauding him. True, pictures are hysterical – so much that you might think dad would have to be at least a little bit tipsy to take them. In fact, it’s just the opposite.

Wolfe, who is a recovering alcoholic – not to mention former political speechwriter in a high-stress gig, BuzzFeed reports – turned to humor after he got sober. That is when the picture-taking began.

“When you suddenly become sober, you uncover the person you would have been,” he told BuzzFeed. “I’m happy and laughing all the time and I guess that’s what the alcohol was hiding. I lost 25 years of being myself and now I’m trying to make up for it.”

He is making up for it by sitting in the freezing cold in his shorts, selling ice-cold beverages at a lemonade stand in the snow without a person in sight – along with snow blowing in a Halloween mask and even posing in a bikini top, angel wings and his underwear. He takes the most random pictures, but you can tell he is living his life to the fullest.

“I now have the confidence that I can be who I am,” he added. “Some people see my antics and think I’m crazy but I’m just having fun and now I’m happy I can share myself with (my kids).”

When he’s not posing for pictures, Wolfe is writing books about his path to becoming sober. His first, titled ‘You Can’t Die’: A Day of Clarity, is about his struggles with alcoholism and how he overcame it.

Which one of this adventurous dad’s photos is your fave? Have you taken similar shots with your family? Show and tell in the comments below.