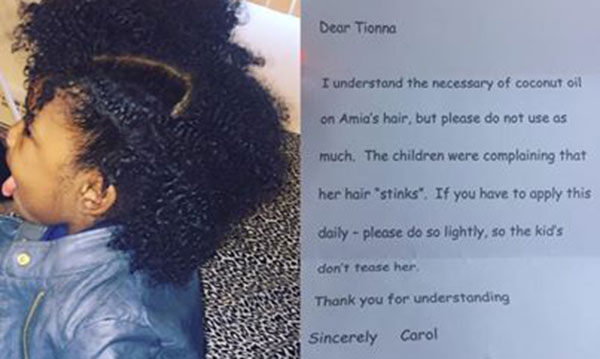 Recently we wrote about a teacher’s note regarding a child’s unhealthy (but really not that unhealthy) snacks. This week, it’s a judgmental note about the way a mom styles her daughter’s hair.

We don’t mean to criticize teachers. In fact we couldn’t be more grateful for the incredible teachers working hard for our kids every day. That’s what makes negative, misguided notes like these so surprising.

Here’s what happened. Tionna Norris, a mom in the Chicago area, got a note from her child’s daycare asking her to use less coconut oil in her daughter’s hair so that her daughter won’t be bullied, The Stir reports.

The letter said this: “I understand the necessary [sic] of coconut oil on Amia’s hair, but please do not use as much. The children were complaining that her hair ‘stinks’. If you have to apply this daily – please do so lightly, so the kid’s [sic] don’t tease her. Thank you for understanding.”

So mom met with the director at the Raggedy Anne Learning Center and found out that little Amia wasn’t actually bullied and her teacher acknowledged that the coconut oil has no significant smell. Instead, it turns out the teacher has a “sensitive nose,” according to the article.

Norris later posted to social media saying that her daughter won’t be returning to the daycare and expressing disbelief in how the school handled the situation.

“Let’s for the sake of argument say Amia’s hair did stink and the bullying really did happen (but it didn’t) the letter should have read. ‘Ms. Norris, an incident occurred at school today where the children teased Amia’s hair because they were unfamiliar with the smell. I corrected the issue, we had a lesson about culture and why Amia’s hair is different, the other parents were notified and I just wanted to let you know what transpired today.'”

And she’s completely right. It’s unclear why the teacher sent the note home in the first place but if any teasing took place – or even if the teachers were concerned the girl would be teased – it’d be a teachable moment for the other students to learn about differences. Not a chance to reprimand mom for her hair care choices or make the girl feel singled out.

Besides the disrespectful tone in the note, the most outrageous part of the whole thing might be the suggestion that the coconut oil could cause a problematic smell in the first place – since it’s typically extremely mild if noticeable at all.

As commenter Stephanie wrote in response to the story on The Stir, “I have psoriasis and cover myself in coconut oil. Only thing that helps soothe it. 99% of the time it is odorless, the other one percent it smells like … wait for it … coconut!”

What would you do if your child’s daycare sent a note home like this? Tell us in the comments.