It looks like a bizarre attention grab at first. But this 97-year-old Holocaust survivor is seriously taking on fascism, ageism and more with heavy metal music. 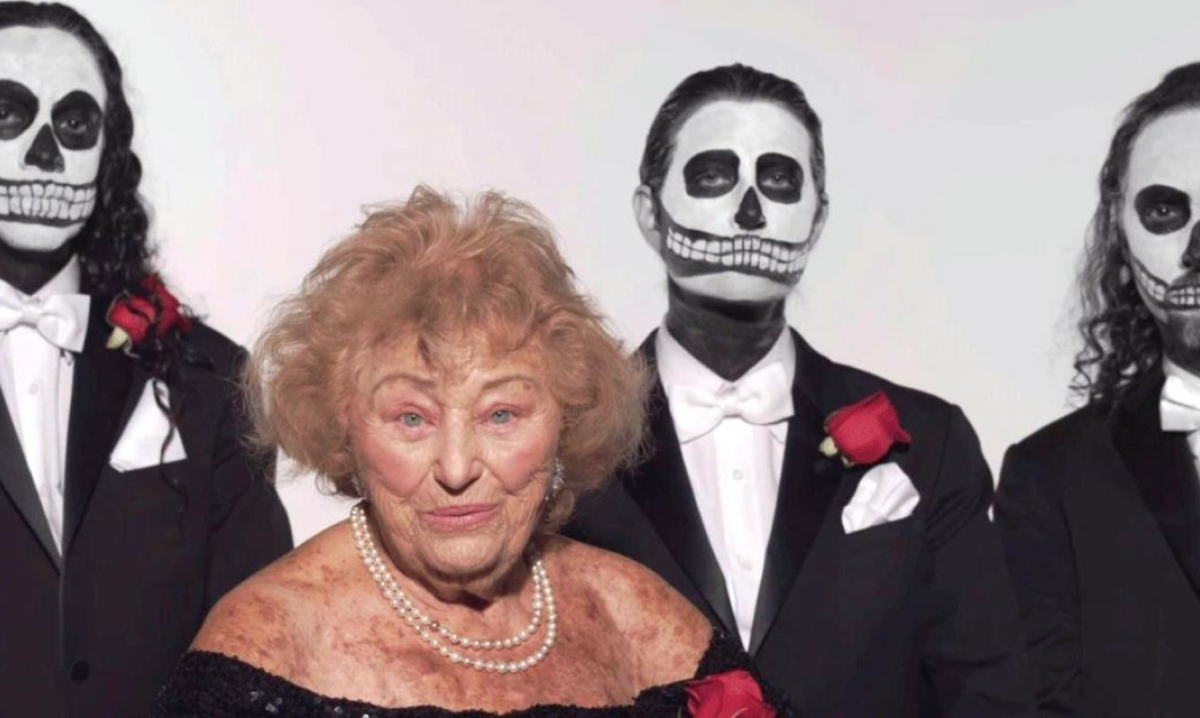 For many, “heavy metal music” drums up images of bands like Black Sabbath, Motorhead, Metallica and the like. They’re typically youngish dudes laying down heavy tracks.

But Inge Ginsberg – an Austrian-born 97-year-old who lives in Tel Aviv – rips that stereotype limb-from-limb with her band Inge & the TritoneKings. Her late-in-life reinvention was the focus of a short 2018 documentary called Death Metal Grandma that recently grabbed headlines again in an Atlantic post.

There’s certainly shock value to a nonagenarian in a glittery gown howling into a microphone surrounded by guys with skeleton-painted faces. But Ginsberg’s story goes deeper. For her, it’s about telling her story and finding her voice in a world that doesn’t always care to listen – especially, often, to older people.

As a young person, she lived in Vienna during World War II and worked as a spy. When it was found that she was Jewish, she was forced to flee the Nazis or face time in a concentration camp.

So she left everything behind and moved to a refugee camp in Switzerland.

When the war ended, she and her husband immigrated to the United States and had a successful lifelong career in music. In fact, the duo composed tunes for the likes of Nat King Cole, Doris Day and Dean Martin, The Atlantic reports.

But as she aged, Ginsberg found herself facing that feeling of being voiceless once more as she discovered that “old people are excluded from life,” as she says in the documentary.

Instead of just accepting this as reality, though, Ginsberg took control and took her voice back with one of the unlikeliest of hobbies – a death metal vocalist.

For the unacquainted, death metal is a subgenre of heavy metal that features powerful drumming, low-tuned guitars and aggressive deep growls.

Personal aside: As a metalhead, I wouldn’t categorize her as a death metal vocalist per se – though I’ll admit my taste centers largely in the thrash (looking at you, Power Trip) and power subgenres.

That said, everything about this “death metal grandma,” as she was dubbed in that film featured at last year’s Boston Jewish Film Festival, is absolute winning.

There’s less intensity in her music than what I’m used to, but she still goes pretty hard for being nearly 100 – and her lyrics, which are primarily sung in German, focus on saving the environment (yes!) and fighting against fascism (double yes!).

All this considered, despite the fact that she’s not my typical flavor, I’d probably buy an album of hers just to support the face-shredding awesomeness that she embodies on about eight different levels.

I’d say she has definitely found her voice again and honestly only hope that I’m as rad as she is at that age.

What do you think of this “death metal grandma”? What are some surprising, inspiring things you’ve seen grandparents do? Tell us in the comments.