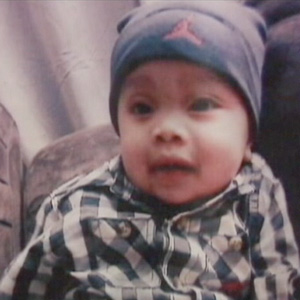 It was supposed to be a happy occasion. On a recent Sunday, three baby showers were being held at Club Celebrity in Detroit. But a scuffle over seating may have been the motive for a shooting spree that left a baby dead.

That's what family members – specifically, the grandmother – of 9-month-old Delric Miller believe, according to various local reports. The next morning, in the early Monday dark, a gunman sprayed a Greenview Avenue home with an "AK-47 type assault rifle," firing some 37 rounds, the Detroit News reported.

Baby Delric, sleeping on the couch, was killed.

"They went to the shower to celebrate life," a sobbing Cynthia Wilkins, Delric's grandmother, told the News. "Instead, a life was destroyed."

It's also sparked outrage – in the homicide-hit city, which is hovering near 60 murders in 2012, and well beyond. Mayor David Bing has made public appeals to "stop the madness," and some Detroit community activists have launched their own door-to-door investigation. Just yesterday, it incited Fox 2 News reporter and dad Charlie LeDuff to pen a column titled "Anarchy in Detroit." It's a brief but brutal read – especially the blunt roundup of recent headline makers, also including a 14-year-old Detroit boy who shot his mom while she slept. And it sums up the concern and anger the killings are leaving in their wake.

As of his death on Feb. 20, little Delric was No. 43 this year, the News reported – and the second youngster to be murdered within a three-week span. Still under investigation, the case has lured a $10,000 award for information leading to an arrest and conviction, the Detroit Free Press reports – and, in the latest news, a 22-year-old man in custody is a "person of interest."

And it may all trace back to that fateful shower. What happened?

The event was overbooked, Wilkins told the News, spurring an irate woman who couldn't find a chair to start "knocking tables down." Wilkins' daughter, who was attending the shower, then left – but allegedly was followed by a group, first to a gas station, and then to her home (Fox 2 News reported that after the event, "a family friend got into a fight"). After presumably taking off, the aggressors returned hours later to open fire, Wilkins believes.

It's maybe easy to brand this incident the product of a consistently crime-socked city. But, especially if the shower connection proves true, it points to a stark root cause: A petty fight – over seating. A person acting on impatience; a huffy impulse. In this case, it escalated out of control.

Detroit's unique woes aside, it's perhaps a grim reminder, even in smaller situations, to take a moment to breathe, re-center – and remember what's important. Here, it ultimately may have spared a tiny boy's life.