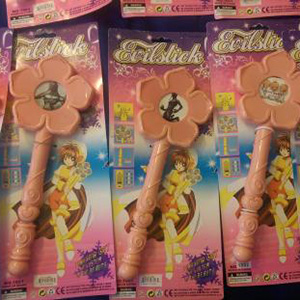 The last thing you expect to find among a pink sea of Barbies and baby dolls is a gruesome image of a child, but that's exactly what one Ohio mom found when she peeled back the foil on the princess wand she bought for her 2-year-old daughter.

Note: Before you continue reading, be aware that the images on the upcoming links are disturbing and might not be suitable for children.

On the outside, the $2 "Evil Stick" looks like an innocent pinkish-orange flower. When Nicole Allen peeled back the foil on the toy, however, she found the image of a demon child slitting her wrist, accompanied by maniacal laughing.

At first, there was some skepticism as to whether or not there was truth to her claim, but thanks to the sleuths over at Snopes, it has been confirmed that the creepy, cackling wand actually does exist. The folks over at Snopes went to the dollar store and snagged some of these toys. Only one other Evil Stick actually had that same image, according to a video on Snopes. Other images included zombies and anime characters.

The packaging shows no manufacturing information aside from saying it's "Made In China," and according to Allen, if you look close enough the hidden image is not a drawing, but an actual picture of a girl.

"I'm outraged over it," she said in a video posted by KTBS News. "I want to know how they think that it's suitable for a child."

While momma-bear might not have been happy with the toy, the Dayton-area store's owner, Amar Moustafa, defended the toy and said that Allen should have inspected the toy more closely because of its name.

"The name on it is the 'Evil Stick' … so if I'm buying it for my kid, and I have young ones, I would inspect it before I even gave it to them," he said in the same KTBS video.

So far, the toy has brought about mixed reactions.

One reader of The Stir, Victoria Villa, agreed with Moustafa saying "it does say evil stick on the package. I would not buy my kid something called an evil stick to begin with."

Another commenter, tairakittie, disagrees and pointed out that the packaging is what makes it very misleading.

"There is a cute little anime girl on the package, it's all pink and pretty, nothing about it screams 'do not give to your child,'" she wrote. "I read packages and probably wouldn't have even thought twice about buying this for my daughter, it doesn't look dangerous or evil at all…"

Moustafa agreed to remove the toy from store shelves if he received more complaints, but he never got the chance.

He did receive multiple calls to remove the toy from shelves, he also received inquiries about the toy, and after two years on his clearance rack, the Evil Stick sold out. It was last seen posted on Ebay for over $200.