Do Hatchimals Swear in Their Sleep? 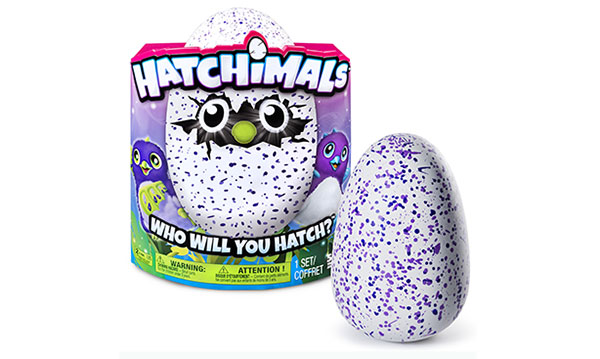 Ah, the Hatchimal. If you don’t already own one, you’ve probably heard of it. The little robotic bird hatches its way out of a shell, makes sounds and lights up. Adorable right?

But some parents are claiming this toy isn’t so innocent and sweet. According to them, when their kids’ Hatchimals drift off to sleep and start to snore, they swear, CNNMoney reports.

When I first heard of this, I had to hear for myself. What does it say? This is the video I watched. Take a listen:

And I didn’t get it. I had to look in the video’s description to figure out what I was supposed to be hearing. Apparently, the dirty phrase moms and dads are hearing is, “f— me, but despite all of the YouTube videos parents have posted claiming their kids’ bird-like “pet” is swearing, it sounds like a lot of unintelligible babble to me.

I think parents are hearing what they want to hear. Let’s be real. These toys are not swearing. There is not some mischievous person sitting at Spin Master programming a toy to drop the F-bomb for fun.

At any rate, kids aren’t hearing swear words from their toys. More than likely, f— has left your mouth in front of the kids at least once (and even that isn’t as bad as you might think, according to a recent study).

I was talking to my co-worker Jessica about this topic. Her daughter has a Hatchimal. She told me Hatchimals can actually learn phrases your child says and repeat them. As far as she could tell, there weren’t any limits on what words your child could teach it. To me, it seems more likely kids would teach the profane words to the Hatchimals – not the other way around.

Spin Master, the toy’s parent company, told CNNMoney, “Hatchimals communicate by speaking their own unique language, which is made of up of random sounds, and by making other noises, including shivering when they’re cold and snoring while they sleep. We can assure consumers that Hatchimals do not curse, nor do they use foul language.”

Do you think these Hatchimals are swearing? Comment below and let us know.