An ordinary public school talent show in Manhattan ended with a surprise risque drag performance by a dad – leaving parents, kids and the internet aghast. 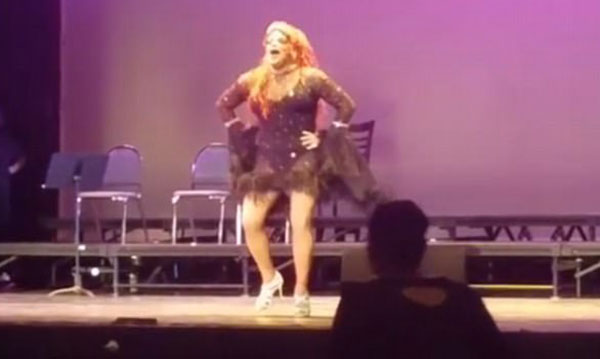 Kids, prepare to be upstaged in the most controversial of ways. Who doesn’t love school talent shows? Shaky choreography, subpar piano performances … and, now, an all-out drag performance. By a New York PTA dad.

Quinones’ extravaganza was listed as a “Special Surprise Performance!” on Manhattan District 4’s talent show schedule. Dismayed families in the audience were subjected to Quinones’ suggestive dancing and a full flash of his black G-string, the Daily Mail notes.

“I left the show the minute he started sticking his tongue out. I had my children with me and I wasn’t going to allow them to see that,” a school parent said anonymously to New York Daily News. “It was a very poor presentation of Iris Chacón anyway. She was not like that.”

The New York City Department of Education released the following statement: “The content of the performance was inappropriate, and a school administrator has spoken with the parent. Mr. Quinones has served the maximum number of terms permitted as PTA president, and the school will host an election later this month to select a new president. The superintendent will continue to meet with parents and review the process for vetting performances at district events,” ABC 7 reports.

Unsurprisingly, people who viewed the video of Quinones’ performance were outraged, as well.

“Why are the parents screaming? Why isn’t everyone walking out? Let the lawsuits begin,” Marilyns said in a comment on The Blaze’s report.

While commentary sometimes got ugly, at least one transgender person, going by Gina, spoke up on the same report, offering this:

“I’m transgender and I really don’t care if the performer was a parent, a teacher, a member of the school board or pastor at the nearest church. There’s no rationale for including that kind of performance in a show with children intentionally present in the audience,” Gina noted on The Blaze. “That display was not the way to do so in any sort of positive learning experience.”

How would you handle the situation with your kids if they saw this “surprise” performance at their school? Let us know in the comments below.