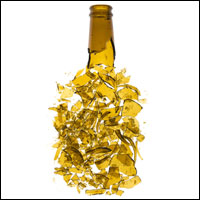 By now, the surveillance video of Brownstown dad Shawn Weimer has grabbed international headlines. It's a bizarre scene, watching the 39-year-old, clad in a loose black T-shirt, declare to a Citgo gas station attendant:

But even more surreal, after Weimer adds, "In the truck. We're parked right there. She drove us all the way here," is his child's reply.

"And I parked!" the tween proudly declares. She's about elbows-high at the counter. And, based on the outdoor footage, the kid rightly deserves props. She pulls her dad's shiny red van, sliced with a white-bolt design, up next to a gas pump with ease and, after their little chat in the station, pulls away like a seasoned motorist – only propped one up with a booster seat.

The story's shocked parents throughout southeast Michigan – and well beyond. There's no question Weimer's in some serious trouble. He's being charged with two felonies and a misdemeanor, according to the WZYZ.com Channel 7 Action News report. Those counts include second-degree child abuse – and a "habitual" felony charge, due to prior convictions including unarmed robbery and felon in possession, the station reported. He's due back in court Nov. 8.

What's sad and strange is the flip fathers that have been painted during this debacle. Even the girl's mom, Heather Hammon, 36, told The Detroit Free Press, "He's a good dad. He just made a bad choice." The couple, who reportedly haven't been together since their child was born, shared custody, with Weimer spending two weekends a month with his daughter. He'd take his kid to the zoo and beach, the report continued – and "The girl also has a four-wheeler at his house." (Apparently, Hammon wasn't aware her child was allowed to drive anything else at dad's place.)

His friends, while clearly stunned, have also rallied. "It was upsetting, 'cause I'm a mother myself," said one of them, Jill Phiel, to WXYZ. "But the way that she looked in the video, she looked like a happy child." She's not wrong.

But another guy, a former employee who'd worked at Weimer's sewer and drain cleaning company, offered the station this insight: "That's not Shawn. I mean Shawn drinking and Shawn sober are two totally, 110-percent different people."

And, by all reports, it all seems pretty premeditated – and strangely commonplace. It wasn't like Weimer was in the midst of partying and had to pick up his daughter on an emergency (which of course, even then, wouldn't have been wise). He'd picked up his daughter from Hammon's earlier that night, the Free Press noted, and, her mom says, didn't appear intoxicated.

Still, Hammon reportedly isn't bent on pressing charges. While she told the Free Press she was "mortified" that her child's dad put the girl "in that kind of danger," she added, "I want him to get himself better. I don't want him to go to prison." For his part, Weimer's been forbidden from having any contact with daughter for the time being. And as for this poor kid?