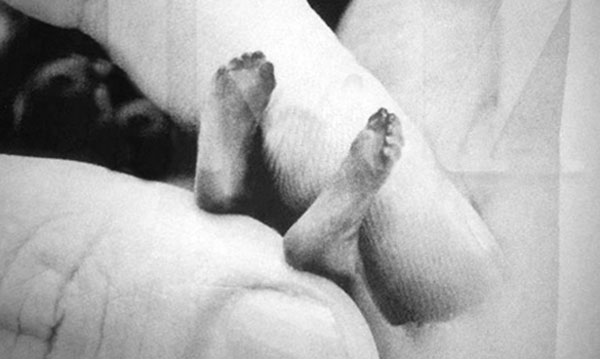 A wedding. The Malaysia mission. Father’s Day fun. The well-known Duggar family of TLC’s reality series 19 Kids & Counting have made a TV career of publicizing their super-sized brood’s everyday life. But their photos of baby No. 20 – who recently died in utero at about 19 weeks old – have jarred fans and critics alike.

Artfully shot in black and white, the subtle yet startling images both feature mom Michelle Duggar holding Jubilee Shalom, her tiny stillborn child. Essentially, noted TMZ – which grabbed the pix from a fan site, after they reportedly originally cropped up on a family member’s Twitter page – they’re shots of a “fetal corpse.”

In one, the baby’s tiny feet appear between mom’s thumb and index finger. Above the image, varied fonts proclaim, “There is no foot too small that it cannot leave an imprint on this world.” The second shows the baby’s miniature hand listlessly draped over the pad of Michelle’s middle finger.

That latter image also was prominently featured on the Duggar family’s website – and, according to a Duggar blog, the family distributed the photos during a memorial service at an Arkansas church, with hundreds reportedly in attendance. The entire giant clan was there in black – the young boys in suit coats and bow ties.

Granted, the Duggars are no strangers to controversy – or shining the spotlight on personal family moments. The latest tirade started back when Michelle and husband Jim Bob announced the pregnancy in November, telling the Today show, “There’s always room for one more.”  At the time, Michelle was 45 – and her previous pregnancy had ended in a premature delivery and various complications. Even they were caught off guard at this latest news, with Michelle reportedly saying, “I was not thinking that God would give us another one, and we are just so grateful.”

And, as anyone who’s tuned into (17, 18 or) 19 Kids and Counting since it kicked off in 2008 knows, the Arkansas family isn’t into calling the shots on the headcount. As their website puts it, back in the ’80s, “They asked God to bless them with as many children as He saw fit in His timing.” And, as Michelle says in her audio letter to Jubilee, “From now on, whenever I’m asked how many children I have, the answer will be 21: Nineteen here and two in heaven.” (Their very first child, Caleb, also miscarried, prompting the couple to stop birth control and switch gears.)

The latest news has rekindled plenty of old debate, from the Duggars’ Christian conservative convictions to the question of when it’s irresponsible for them to not pull the plug – for health reasons if nothing else. One TMZ commenter put it this way: “Maybe she will take this as a ‘sign from God’ to shut the factory down.”

Yet the family’s wide base of supporters has rallied, too. On The Blaze, “Gramma B” summed it up: “These people seem to be doing a great job of raising these children. It’s no one else’s business.” Their “strong values” and frugal lifestyle (read: non-reliance on government assistance) are common counterpoints.

For a family who’s been so open – all in the name of celebrating children and parenthood – perhaps it makes sense Jubilee got her close-up, too. But, unlike her fellow J-named siblings, she did it without a second of airtime.