Egg-Freezing Parties for Career Women Not Ready to be Moms 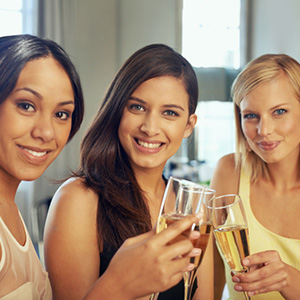 Throwing a party to celebrate a big step in life – graduation, marriage, baby on the way – is time-honored tradition. But women raising their glasses to scientifically freezing their eggs until they're fully ready to have kids? This might be a first.

And a New York-based company called EggBanxx gets the honors. Last week, it hosted its inaugural wittily named "Let's Chill" event, according to the New York Post. It lured a group of 70 professional women to a luxury hotel for a high-class evening of champagne, hors d'oeuvres – and a main course of information on how they can postpone pregnancy until they're ready.

There seemed to be a strong sense of empowerment among attendees. As partygoer Donna Kanze – who's 35, single and in the midst a successful technology-sector career – told the NYP: "I want to take my fertility into my own hands, rather than put pressure on the person I have my next relationship with."

And EggBanxx, which launched this past February, offers just that as "the industry's first national network of highly skilled and specially trained egg-freezing physicians." Its services run the gamut from retrieval and storage to, when the time comes, transferring them back to you. The younger eggs increase pregnancy success rates, EggBanxx notes on its website – "even if you decide to start building your family in your 40s."

As it's increasingly common for women to pursue a career before starting a family, the need is arguably there. Yet EggBanxx's "parties" are, naturally, getting a lot of attention – good and bad. Not to mention a bit of snark.

Like a roundup called 7 Etiquette Tips for Your Next Egg-Freezing Party. Published by The Cut, an online New York fashion magazine, it suggests never serving deviled eggs ("nobody wants to associate their eggs … with Satan") and making a DIY "ticking clock pinata" for women to take out their aggression on.

"Wow," quipped The Cut commenter Aqua21885, "I was really hoping this was some kind of new egg-based frozen dessert idea. Now I'm disappointed." Others, like robin.mccarthy, got the humor, but pointed out, "EggBanxx's event did have reproductive endocrinologists, though, Q&A and lots of helpful information."

And reports indicate the women who paid $45 per ticket to attend found it well worth it. They received a quick overview of how the egg-freezing process works, NYP noted, as well as prices – which average $6,500 or $7,500, which the company touts as being less than the $13,000-$15,000 others charge, NYP notes.

The company is sold on the idea personally, too. One of the hosts – EggBanxx marketing director Leahjane Lavin, age 34 – got big applause when she announced she'd undergone two cycles of freezing. "The pressure is off," she said, the Post reported. "I can now concentrate on my career and becoming who I want to be before having children."

So what do you think – will these informational get-togethers become a thing? Would you attend an EggBanxx egg-freezing party?