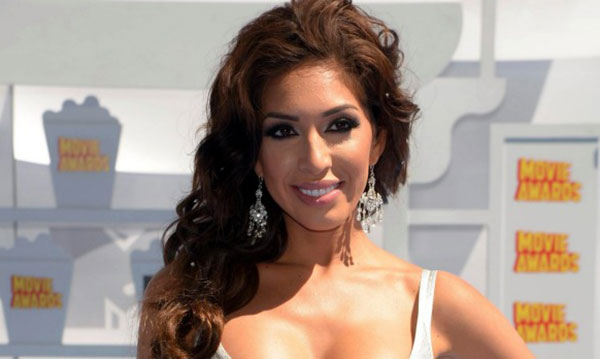 Ex-Teen Mom star Farrah Abraham’s daughter, Sophia, received a generous visit from the tooth fairy when she lost her two front teeth. Abraham posted a photo on her Twitter of 6-year-old toothless Sophia with a stack of $100 bills. Six of them, to be exact.

The caption read, “Sophia lost her 2 front teeth! Busy #ToothFairy.” The post to date has received 176 retweets and 573 favorites. It may not seem to be much, but it did become a trending subject on Twitter.

So, we know where she gets the dough, but is it right for her to weigh her wallet with her daughter? Commenters and fans debated if Abraham was the coolest mom ever or if she was over spoiling her princess.

We think it’s a bit much. No, extremely excessive – and Huffington Post commenter Michael Lagewaard agrees.

“And she’s going to be surprised her daughter grows up to become a spoiled ‘I want it now and I don’t care how you get it’ kind of girl,” he remarked.

Cynthia Ratzke, another commenter on the Huffington Post, weighed in about the tooth fairy’s gift. “Not a reward. That is sending your child down the wrong path in life. Money is not a substitute for good parenting skills. Take that money and seek out a professional before you ruin your daughter’s life.”

Per tradition, the tooth fairy is known to leave a quarter per tooth. In 2012, The Washington Post reported that kids in the United States earned $2.10 on average per tooth in 2011. Times are definitely changing, but we don’t think that just because she grew up in the spotlight that she shouldn’t be treated like a normal kid.

Abraham told US Weekly that her daughter said she wants teeth just like her mom, but Abraham notes she has had her teeth cosmetically perfected. She may have worried everyone when she told US Weekly, “I feel like if plastic surgery is not harming her and making her look better, and keeping her healthy into her years, I have no issues with that.”

And this isn’t the first time Abraham has brought Sophia into the news for what some might call negative parenting. Remember the time when Sophia was 3 years old, and Abraham admitted to waxing her daughter’s unibrow?

Abraham might think she’s helping Sophia, but giving her $600 isn’t going to lower her future expectations. A 6-year-old won’t take a dollar for any other tooth after she’s received hundreds in the past.

What do you think about Abraham’s gift to her daughter? Was it over the top for a tooth fairy visit? Would you do the same if you had the money? Comment below!

This Detroit dad discusses toxic masculinity and what it's like raising a son today.
Read more
You