Children's clothing line Petit Pli offers clothing that grows six sizes. Would you give it a go if it meant you didn't have to constantly buy your kid new clothes? 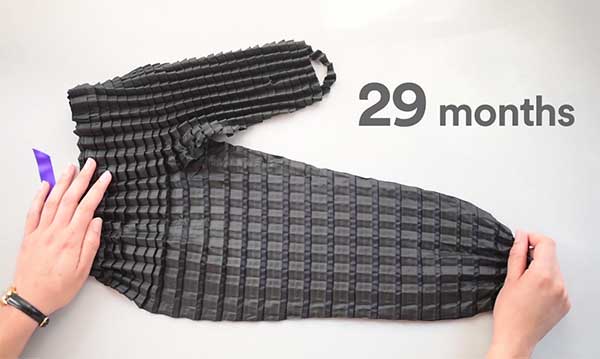 Don’t you wish you didn’t have to buy junior a new pair of pants every time he decided to grow an inch?

Well, that dream could become reality thanks to Petit Pli.

This up-and-coming kids’ clothing brand will soon offer a line of gender-neutral, water- and kid-proof outerwear that is specifically designed to grow with your child.

It started out as the brainchild of Ryan Yasin, a master’s student in London’s Royal College of Art’s Innovation Design Engineering Program, after he bought a new piece of clothing for his newborn nephew, which the kid outgrew before he was delivered.

His story got him thinking about how fast kids grow and how wasteful and financially strapping it is for parents to have to buy their child new clothing every time they go up a size, which can be as many as six or seven sizes in the first two years.

Yasin came up with a prototype of a piece of clothing designed to expand in all directions, while maintaining a shape, from size six to 36 months. He then tried the clothing on both his newborn nephew and 2-year-old niece. It fit both.

After the success, Yasin filed for a patent, which is still pending, and plans to sell the garments in the near future.

Each piece of clothing will be made from synthetic fabric folded into a sort of grid that points downward to repel rain and food. It is also completely recyclable, which makes it green too.

Unfortunately, it does resemble one of those magic popcorn shirts that expanded from the size of your hand to your torso and were super popular in the late ’90s and early 2000s. So, that’s one minor drawback but other than that it’s a totally genius idea.

Kids grow a lot and parents spend so much money on clothing – even if they take advantage of consignment shops – it’s not even funny.

Add that kids outgrow those expensive threads in just weeks and you have to admit that there’s got to be a better way. And what’s better than a single piece that can stick around for a while?

Just slap on a plaid pattern to cover the ’90s slats and it’s the perfect solution.

What do you think, Metro Parent readers? Would you give expandable clothing a go or is it a fashion no-no? Let us know in the comments.