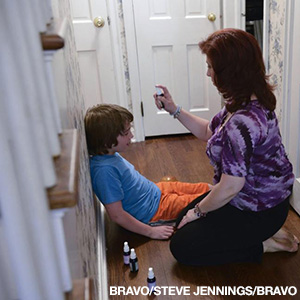 Authoritarian, permissive, helicopter. You may think you know all the different parenting styles. Well, think again. How about shamanistic, conscious-attachment – or glued-at-the-hip?

Starting at 9:30 p.m. on Thursday, Aug. 7, 2014, a new show will prove just how many hardcore parenting types there really are – and exactly how far leftfield they can go.

In true Bravo fashion – think the Real Housewives franchise, Shahs of Sunset – the network has managed to find another group of crazies to throw together for a TV show. Extreme Guide to Parenting introduces you to nine families with some pretty, well, extreme methods – from attachment to hypnosis to a more micromanaging-oriented approach.

Helicopter parents take things to intense heights when it comes to their kids.

"In casting the show, the producers said they sought people who are passionate about their parenting," the New York Daily News reports, "because it's a subject that inherently sparks conversation."

We'll say. In the first episode, you'll meet the overly protective Masterson-Horn family – two dads who don't leave their daughter's side. If you've ever watched Oxygen's Tori & Dean: Home Sweet Hollywood, the duo should look familiar – they're Tori Spelling's long-time friends and "guncles" (aka "gay uncles") to her children. It took the couple many years to adopt their sweet little girl and, as a result, they are a tad doting – to put it lightly.

You'll also meet the Alder family, which practices an all-natural approach to raising their children. Shira Alder refers to her 10-year-old son, Yonah, as an "indigo" child with "intellectual gifts not evident to most of the world," the New York Daily News reports.

Not sure what that means? Neither are we. We'll get a better idea – or maybe not? – when the show begins. And of course, as the season progresses, you'll meet a line of characters, from a nomadic family who lives in tents with minimal belongings to parents who endorse a "warrior" method (kids, better get on those pushups and wall sits!).

So – will you be watching?