In a viral video, a North Carolina father reads and refutes his kid's wall rant about her chores and parents – and shoots up her beloved laptop with a gun. 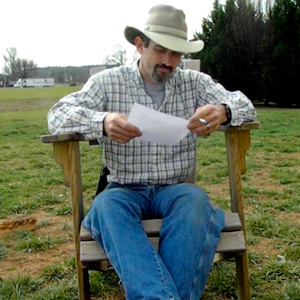 “That right there is your laptop. You see it’s out here on the ground. This right here? Is my .45.”

With those words, North Carolina dad Tommy Jordan emptied nine bullets into his 15-year-old daughter’s computer – as punishment for her brass-mouthed rant against her parents (regarding her chores) on Facebook.

And since then, his viral video, titled “Facebook Parenting: For the troubled teen,” has shot into the stratosphere, nabbing some 21 million views and almost 72,000 likes on Facebook since it debuted last Wednesday.

In it, Jordan sits down in a wooden chair, set against a grassy background, cigarette in one hand and a piece of paper in the other. He then chats up his video camera.

“This is for my daughter Hannah,” he drawls, “and, more importantly, for all her friends on Facebook who thought that her little rebellious post was cute.”

He then reads off Hannah’s wall-posted tirade from the paper – which, being an IT guy, he explains, he found despite being blocked from his kid’s feed.

“I’m not your damn slave,” it begins. Peppered with PG-13 expletives, she waxes disgruntled Cinderella-style, griping about everything from making coffee and shoveling fertilizer to washing dishes, countertops and floors.

“Do you know how hard it is to keep up with chores and schoolwork?” she writes. “It’s freakin’ crazy,” concluding, “I’m gonna hate to see the day when you get too old to wipe your ass, and you call me asking for help. I won’t be there.”

A cowboy hat-wearing Jordan is incredulous. He details her chores (they’re a bit tamer). At one point, he snorts, “Pay you for chores? Are you out of your mind? You are 15 going on 16!” And he’s torqued about the $130 software upgrade he’d just installed – “blew half my day” – on Hannah’s laptop.

“Kid, you’ve got it easy. Way easy,” he says, just before popping the comp. “It’s about to get a whole lot harder.”

It took barely two days for the eight-minute YouTube post to catch fire. And, while not everyone approves of the method, the response has been overwhelmingly in the green, with advocates applauding a return to respect and discipline.

“She got what she deserved. Plain and simple,” LeWaffleAG opined. “I’m so tired of this generation being coddled like they’re made of glass. I don’t (know) if I would have shot the computer, but hey, whatever gets the message across.”

Countering shouts of “Win!” “Legend,” “Dad of the Year” and even one “You deserve a Nobel Prize, good sir,” though, is concern, and even disgust, over Jordan’s public punishment – with some crying “bully.”

“Parenting isn’t breachin into yer daughters privacy for the sake of it,” says Jay Ibanez on Facebook. “Did you really have to humiliate your own daughter on Facebook and YouTube and call it PARENTING? If you lack communication. Speak! If you lack trust. Speak!”

Apparently this wasn’t Hannah’s first offense. Dad had previously caught another of her FB outbursts – “something fairly childish and stupid,” he says – and grounded the teen for three months.

“Maybe a little over dramatic, but totally justified,” observed YouTube supporter Crypticus, while offering this double-edge: “Not sure your relationship is going to ever come back from that though; girls hold grudges forever! Especially teenage girls.”

It’s worth noting both parents seem to have been in on the penalty (“Your mom told me to be sure I put one in there for her,” says Jordan, dedicating bullet No. 7 to her).

As for Hannah? Her immediate future entails paying back pops for that $130 software, roughly $9 in ammo and buying her own new laptop. Oh – and possibly being grounded till college.

“Hope you enjoyed your little fiasco on Facebook,” dad concludes. “Hope it was worth all this. Have good day, y’all.”