Some people think they are funny but for anyone dealing with infertility, these posts are anything but a joke. 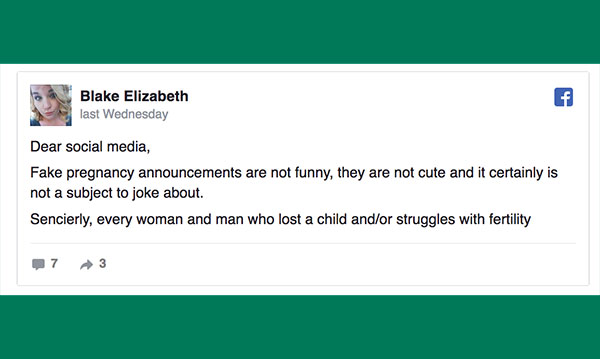 Social media can be great in so many ways. It gets the word out about social issues, can provide a network of support for parents – and yes, it can even help you find your lost puppy (yes, for real). But there are many downsides to social media including fake pregnancy announcements.

Yes, people actually prank their followers with a pregnancy announcement.

Fit Pregnancy notes that these announcements are post-chain style and are pretty lengthy. The pregnancy is announced, followed by a story and then at the end, a big PSYCH! The entire thing is a joke.

“WE’RE EXPECTING!!!!!! 5 weeks!! I know its crazy isn’t it? I can’t believe it myself! I wasn’t going to put it on here but wanted to make it official. =). I mean who would have guessed that happening again!! Yep, its official…We are expecting Santa Claus in just 5 weeks!!! … Re-post if you are on Santa’s nice list!!!”

“Social media users then prompt their friends to copy and paste the posts and share them on their own platforms,” Fit Pregnancy adds.

Some people find these posts cute or funny, but those who suffer or have suffered with infertility find them particularly cruel.

“Just a friendly reminder that pregnancy announcements by themselves are a trigger for some women, and your fake announcements could really ruin someone’s day. Please try to be considerate of your friends who may be struggling with conceiving,” Rachael Wolf Spencer posted on Facebook.

I’d have to agree with this commenter. Pregnancy announcements can crush a woman who is trying to conceive, and to keep reading only to realize that said announcement was a joke adds a layer of stress to the already stressful situation of trying to have a child.

Think of your audience before you post. You never know whose day you’re going to ruin with something that seems harmless.

What do you think of these posts? Tell us in the comments section.