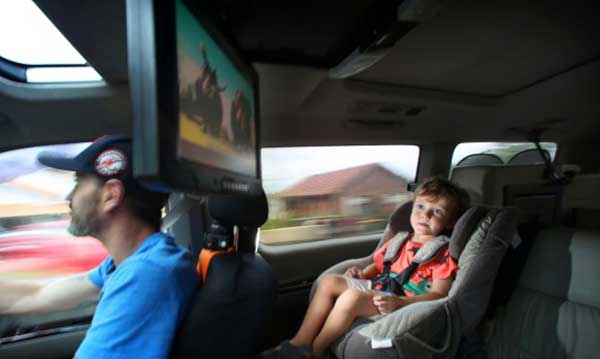 What would a parent do for just a moment of silence? Well, apparently some would drug their kids. A new driving survey out of Australia found that one in five families in the New South Wales area admits to drugging their kids with sedatives to keep their kids quiet during long car rides, according to the Sydney Morning Herald.

The survey, which was issued by insurance company GIO, questioned the habits of some 3,700 drivers and found that more than half felt distracted by their kids in the backseat. To curb this distraction, four in five give their kids computer games to keep them occupied and 70 percent give treats to keep them quiet, while 18 percent tranquilize their kids into submission.

The drug of choice: Phenergan.

Phenergan is the product name given to Promethanzine, a drug used to treat allergies symptoms. It is also used with other medications to treat anaphylaxis, and comes in a tablet or a liquid, according to the U.S. National Library of Medicine.

The drug is not recommended for kids under 2 years old because it could cause respiratory depression, which slows or stops breathing – and could be fatal.

Talk about a potentially pretty steep cost for an hour or two of silence.

Obviously, doctors aren’t to chuffed about the idea of drugging kids to keep them quiet on vacation.

Joanne Ging, the head of general medicine at Westmeads Children’s Hospital in Sydney told The Sun Herald, “In terms of sedation, this is an unpredictable drug. We would never recommend it for children on car trips or wherever, because its side effects can trigger the exact opposite effect, including hallucinations. It’s a medication that really should only ever be used for allergies.”

There isn’t a lot of evidence that this is common practice over here, but the practice is certainly making waves overseas.

It seems that most oppose the practice but some, like Sydney Morning Herald reader, JA, don’t see a problem with it. He writes that he’s “So sick of these holier than thou attitudes. As if anyone has the patience to play games with their kids for hours in a car. Get real. Our parents drugged us on long car trips and we lived to tell the tale.”

As it turns out, however, plenty are willing to opt out of drugging their kids for entertainment instead. Fifty percent use a DVD player, two-thirds play road trip games, 54 percent crank up the tunes and 64 percent threaten to turn the car around, according to the Sydney Morning Herald article.

What do you do to keep your kids occupied on those long car rides, and would you ever consider drugging your kids to keep them quiet?

Brought to you by Humane Society of Huron Valley.
Read more
Travel