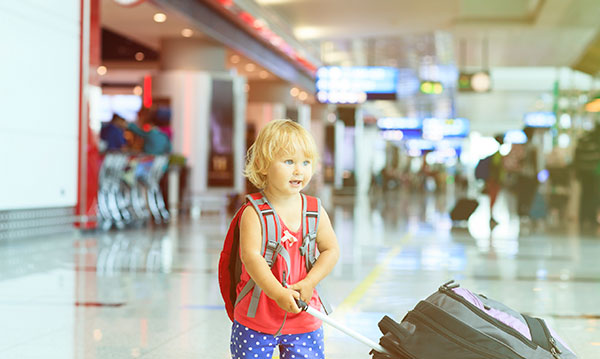 A family is thankful that their 3-year-old daughter is OK after they accidentally left her at a rest stop on their way to a vacation in a coastal town in France.

The family was about 90 miles away from the rest stop when they heard a message on the radio that a 3-year-old had been abandoned at the stop, Parenting reports. The parents realized their youngest child was missing from the car and were able to retrieve the little girl, who was unharmed and being held by authorities.

“Another family was at the rest stop and noticed the girl was alone for a while,” Clara Thomas, deputy prefect of the town of Die, said on French TV, according to Parenting. “They took care of her and called police to let them know.”

“Daddy’s car drove away” is what the little girl reportedly told police.

Authorities were planning to talk with the girl’s parents and the area’s prosecutor to see whether further action should be taken, Yahoo News reports.

According to the Parenting article, the parents were surprised because they had asked their older children if everything was OK in the backseat and the older children didn’t mention the missing toddler. The ages of the older children aren’t listed but we have to assume they would have said something if they had noticed.

It’s easy to assume that the parents are simply incompetent, as some commenters are suggesting as the viral news story makes its rounds. After all, who would rely on their other children – who may be preoccupied with other things or generally just trusting their parents to not lose track of their siblings – to ensure all of your children are in the car with you?

Besides, wouldn’t one of the parents have had to physically strap the 3-year-old into her car seat before they could go anywhere?

“The parents are clearly inadequate, why was the child not placed with child services for her own safety until an evaluation could be done on these inadequate parents. How is it possible to forget your child anywhere? Distracted and careless, that is the only explanation,” Violet Rayner posted, in part, in a comment on Parenting’s article.

But as another commenter aptly responds, “I would have made the same comment before I had children or when I only had one or two children. My heart feels for any of these parents. Walk a mile in someone’s shoes before you make such comments,” Therese Cooper wrote.

There’s absolutely no excuse for leaving a child at a rest stop alone, scared and – at just 3 years old – most likely unable to fully communicate what happened or have the skills to get help. It’s a miracle nothing worse happened – just walking into the parking lot could have proven deadly. There’s also absolutely no excuse for leaving a child in a hot car by accident, or letting a child wander away from home because a parent nodded off.

But unlike the sadly countless news reports you can find on a regular basis describing the intentional harm terrible parents inflict on their children, these parents left their child by accident. An awful, potentially deadly accident that none of us can ever imagine making ourselves, but an accident nonetheless.

We don’t know these parents. Are they actually negligent and this “accident” is just one example of their carelessness? Police should certainly consider that possibility and it sounds like they may have already. But unless authorities have reason to believe that’s the case, we don’t think the further trauma of placing the children in protective services while an investigation is completed would seem necessary.

The Parenting article listed tips from the Kid Safe Foundation about how to avoid leaving your child in the car alone. Similar strategies could be used to prevent leaving without your child. We wish that sort of advice wasn’t necessary – it shouldn’t be – but following the tips they offer could stop an accident that you never thought would happen and even save a life. We’ll be giving them a read and we hope you will, too.

In the meantime, we’re just happy this child is safe.

What do you think about this? Should the parents be investigated because they forgot their child at a rest stop? Tell us in the comments.