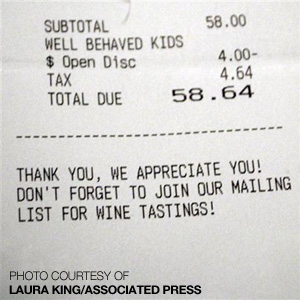 Laura and Chris King of Poulsbo, Wash. were out for a normal dinner with their three kids on Feb. 1 when, to their surprise, the family of five received free bowls of ice cream and a $4 discount. What made Sogno di Vino – the Italian restaurant where they were eating – offer such generous gifts to the family? Well, it seems the Kings had "well-behaved" kids.

After coming home and noticing the well-behaved kids discount on her receipt, Laura posted a photo of the receipt on Facebook; then someone posted it on Reddit – where it went viral. After hitting the Internet, this seemingly nice gesture from the restaurant has raised questions among parents: Are well-behaved kids really that rare, and is this kind of discount needed?

Stay-at-home mom and blogger Robin Shreeves questions whether or not behaved children are all that unheard of.

"I dine out frequently, and it's the rare ill-behaved children (or should I say ill-behaved parents) who catch most people's attention," she wrote in her blog on mnn.com. "We've all been out to eat and been distracted by young children who are running around, throwing a tantrum, or tossing handfuls of Cheerios on the floor. But does that happen every time you go out to eat? Of course not. You most likely remember the ones who misbehave and most likely don't notice the kids who do behave."

Others disagree and feel that rewards for well-behaved tots are warranted.

Huffington Post commenter Mendy Hatsook noted that the restaurant should be commended for its nice gesture and adds that, increasingly, parents are failing to instill manners in their children.

"It's fantastic that those of us who actually parent are noticed and rewarded," Hatsook commented in the Huff Post article. "It's sad that this is now 'out of the norm' and so many of us are neglecting to do our responsibilities as parents."

Commenters like tonkisushi agreed with Hatsook, adding that the responsibility should be put on the parents – and that good parenting should be rewarded.

"Great idea," tonkisushi commented in the Huff Post article. "All restaurants should do this… and tax misbehaved kids! Parents, do some parenting!"

This may not, however, be the last we hear about rewards given to well-behaved children in public establishments, because more and more, businesses are becoming less tolerant of rambunctious kids.

Restaurants, like Cappy's Pizzeria in Tampa, Fla., are even publicly warning parents that families with rowdy children will be asked to leave. Some corporations have even gone as far as initiating child-free zones. For example, AirAsia X's long-haul flights and Malaysia Airlines now offer child-free areas.

For King, the kind gesture was appreciated, but definitely not seen as a requirement.

"We don't expect handouts for acting respectful of the folks who bring us our food," King said to USA Today. "But it certainly makes you feel good when someone else notices your kids in a positive light."

When friends and family ask what your children want this year, experts suggest asking them to invest in your child's college future. It may not have the dazzle of the latest toy or gadget, but it will have value that lasts a lifetime.
Read more
Healing Haven