The English mother of two sent an invoice to another parent after her daughter returned from a play date with scuffed shoes. 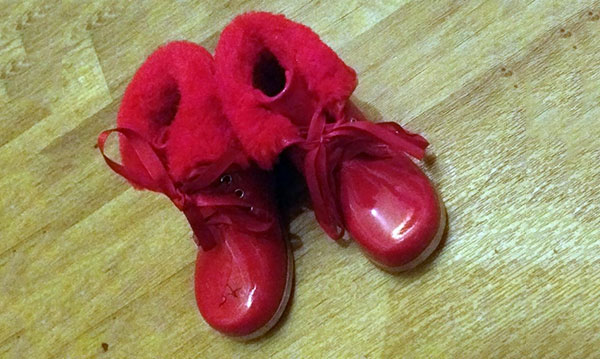 Spending nearly $400 on a pair of shoes for your 3-year-old daughter is pretty insane, but sending an invoice to another parent after the aforementioned shoes were scuffed at a play date is even crazier.

No, this isn’t the plot of a scripted TLC show. Sarah Louise Bryan, a fashion designer known for making dresses out of dead fish and strangers’ pubic hair, sent her 3-year-old to a play date wearing Italian red leather boots costing $396. After the shoes were scuffed, Bryan sent an email to the other parent demanding she pay for a replacement.

Bryan took to Good Morning Britain, an English talk show, to defend herself. During the segment, Bryan says, “You send your child somewhere to be looked after by a responsible parent, and they came back with scratches on their body…”

Though in this situation, the scratches were limited to the boots.

Piers Morgan, one of the talk show hosts, calls Bryan the “worst kind of parent.”

And it seems many people agree. Commenters on the YouTube clip of the television show have harsh words for the 29-year-old mother.

Commenter wekiwisdofly85 says, “Her daughter will probably never be invited to parties or get togethers for fear of being billed for a scuffed top. Nice one lady.”

“Who does she think she is? The Queen?” commenter Rebecca Percy adds, “The friend isn’t responsible for general wear and tear of the shoes. The friend offered to look after the child, not her shoes.”

After the Good Morning Britain scolding, Bryan penned a lengthy Facebook post defending her behavior on the talk show, saying she was “worked up from the past 24 hours.”

She does offer up a feeble apology, saying, “But I do agree that I acted rash and without thinking acted way too over the top but that just makes us human and surely we are allowed to make mistakes HOWEVER my behaviour to the situation hands up was wrong and if I could go back I would […]”

The commenters on this post were generally more forgiving, though most people still thought that spending hundreds of dollars on toddler clothing was strange.

Laura White-Scott says, “We all parent very differently, there is no right or wrong way to do things. I do however think that spending ridiculous amounts on shoes and then billing other parents for damage is both unrealistic and pretentious. I’m sure you are a fantastic mum, please don’t lose sight of your daughters needs as a child. Which are most certainly not £300 shoes.”

What do you think? Should the parent putting on the play date be responsible for replacing damaged clothing? Tell us in comments.