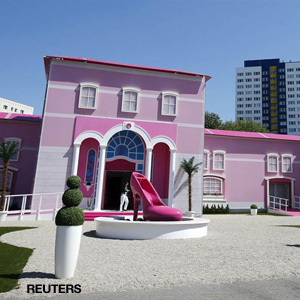 My dreams of a life-size Barbie Malibu Dreamhouse are now a reality – and a nightmare for feminists everywhere.

On May 16, the Barbie Dreamhouse Experience opened in Berlin, Germany – and the pink paradise is making feminist groups want to puke. And protest.

About a dozen activists rallied in front of the 27,000-square-foot building, which is located near the Alexanderplatz shopping district, during its opening week, according to NBC World News.

"Our protest is not directed towards little girls and their dreams," member Michael Koschitzki said in a World News report. "But, for us, this so-called Dreamhouse symbolizes the beauty craze and the discrimination of women in modern day life. It presents a cliche of the female role in society."

Franziska Sedlak from protest group Occupy Barbie Dreamhouse told NBC that the dream world that Barbie presents suggests that women cannot be anything but beautiful. And of, course, life isn't always about being beautiful.

Topless women from Femen, a female rights group, also picketed during the opening day, according to the The Huffington Post United Kingdom. One breast-baring protestor put her own spin on the lyrics to Aqua's hit "Barbie Girl," as she paraded around with "Life In Plastic is Not Fantastic" painted on her body.

While demonstrators were outside, Barbie-lovin' little girls and their families were having the ultimate Barbie experience inside the walls of the Pepto-Bismol pink building, which gives you the chance to tour Barbie's living room, kitchen and walk-in closet, to name a few.

Try on some of her clothes, too. Other rooms include a library complete with pink computers and pretty princess chairs. Play the pink piano, or braid Barbie's hair in another room. There's a moving sled to ride on, too. The opportunities for plastic-inspired fun are endless.

The Dreamhouse is one of two in the world. The other one is right here in the states – Sunshine, Fla. to be exact – and features 10,000-square feet of "Barbie's signature pink."

As a kid, I loved Barbie. And, no, I don't blame her perfect plastic frame for any of my body issues. A number of factors can fuel a young woman's body obsession. So, let's stop fixating on that point and let these young girls enjoy their moment in the Malibu Dreamhouse!

Love it or hate it, an estimated 3,000 visitors are expected to visit the Dreamhouse daily for the next three months – until Barbie moves to another European city.

Make mealtime less of a hassle with these fun ideas.
Read more
You