In a total of 31 public K-5 Florida elementary schools in Marion County, students are now free from after-school assignments. Is it cause for cheer or concern? 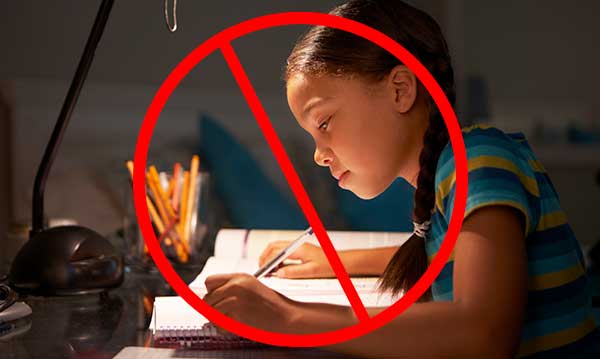 School keeps the kids out of parents’ hair for six hours a day, on average. Homework guarantees at least an extra hour of quiet while they’re working on their multiplication tables – if you’re not getting dragged into doing some of the grunt work. Well now, hundreds of families in enrolled in Marion County, Florida elementary schools just lost one hour of peace – or pain, depending on your POV.

On July 12, 2017, superintendent Heidi Maier issued a ban on daily homework for elementary schools in the district, according to ABC Local 10 News. The decision reportedly was based on a study conducted by Richard Allington, a University of Tennessee professor, that found “students perform better when given a break from the rigors of a typical school day.”

As Maier told the TV station, “The research showed that students who are given a preponderance of homework do not perform better, or get better grades, than those who do not.”

Marion County is not the first in the country to ban homework. Last year, the K-8 Kelly Elementary School in Holyoke, Massachusetts also declared a yearlong ban on homework, according to Fox 12 Oregon.

So, instead, parents of K-5 kids in the 31 Florida elementary schools are being asked to read with their little ones for 20 minutes every night, Local 10 reports. Which is arguably a better tradeoff, many say; after all, it’s easier to read together than to try to re-master the periodic table – and you get to spend quality time with your kids.

“(Homework) eats into the few precious hours we have together after school and before bedtime,” says Mike Julianelle (Dad and Buried) in his post on Scary Mommy about the ban. “It doesn’t help that I can offer little assistance (I’ve spent the last 20 years avoiding math, and I just plain don’t understand Common Core).”

Others parents, though, are worried about the zero-tolerance approach on traditional homework – including Marc Kortlander.

‪”Quite a foolish move,” he comments on an Action News Jax Facebook post. “When my children were in school they would get hours of homework and that was too much, but no home is a very bad idea. In addition to knowledge gained, learning to be responsible by doing a small amount of work is invaluable.”‬

But many more seemed to applaud the move, including another commenter on that post, Andrea Klipper, who says her son is entering fifth grade in the Marion district. “I’ve seen him in tears of the sheer amount of work and stress that excessive homework causes,” which includes up to two hours per night, she says. “I don’t think daily homework is productive. It makes for unhappy kids and parents.”

Whether the ban guarantees more quality time with kids or less valuable time to practice schoolwork, Marion County will find out.

Is banning homework a smart move? Do you wish your kid’s school would follow suit? Let us know why in the comments below.