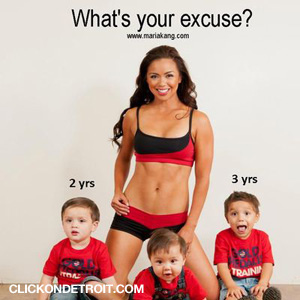 Here's the situation: A photo goes viral, reaching over 16 million views. Not your typical family photo, mind you. It's former pageant queen and current "fit-spirator" Maria Kang – wearing a workout sports bra and shorts that show off her toned abs and body – posed with her three young sons, all a year apart, with the question "What's Your Excuse?" looming over her head in bold.

Actually posted to her Facebook page last year – in September 2012, about eight months after she had her third child – it recently resurfaced, according to Sacramento's KSDK.com local news station. The original photo all began harmlessly enough, with Facebookers commending Kang on her physical appearance – "You freaking rock Maria!" "I'm putting this up on my fridge. She's my hero!" "Thanks for (the) motivation!!" – all posted to the photo in the first week.

But with the positive reaction, negative wasn't far behind. Referred to as Kang's "Facebook haters," commenters came forward accusing her of being a "narcissistic self-absorbed twit," having a surrogate and not caring for her children – choosing, instead, to dedicate her time to working out.

The message was especially offensive to mothers who focused on the message. Ashley G. said, "Sorry, I'm in good shape but I find this caption pretty rude."

And, Janie G reasoned, "If this said 'I'm proud of myself' 'I worked hard for this' 'You can do this too,' I'd have no problem with it."

Before long, it seemed a "social media mommy war" had broken out, as the Examiner.com put it. But for Kang, the final straw, she told KSDK.com, was when someone called her a "bad mother."

That prompted Kang to take to her Facebook to make a public apology. She posted:

"I've been getting an influx of new followers, emails and comments (on my profile pic) recently. Some saying I'm a bully, I'm fat-shaming and I need to apologize for the hurt I've caused women. I get it. SO here's my First and Final Apology: I'm sorry you took an image and resonated with it in such a negative way."

Kang explained that she has struggled with her weight and is not naturally skinny. She said that she didn't give into fatty foods while pregnant and did not use pregnancy as an excuse to be inactive. (Incidentally, this isn't the first time she's addressed the backlash – she also blogged about it early on last year, when it also went viral and drew criticism.)

In her latest post, she added, "What you interpret is not MY fault. It's Yours. The first step in owning your life, your body and your destiny is to OWN the thoughts that come out of your own head. I didn't create them. You created them."

In an interview with Yahoo! Shine, Kang said the photo was meant to inspire. She said, "I wanted to say, 'I know you think you don't have time if you have kids. But if I can do it, you can do it, too.'"

What do you think? Did Kang post the photo to "fat-shame" or was she truly trying to inspire? What about her not-so-apologetic apology?