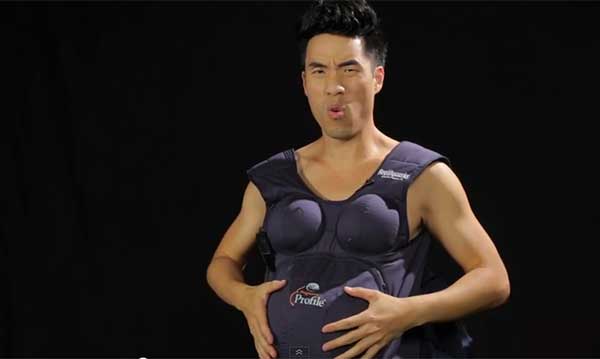 Let’s face it ladies, pregnancy sucks. Yes, the end result is great, but the nine months leading to baby’s grand entry tends to be full of backache, fatigue, hemorrhoids and the swelling of, well, everything.

While there are plenty of men out there that would scream getting kicked in the nards hurts, too (which we don’t doubt), the four men behind Buzzfeed’s “The Try Guys” made a five-part series to experience and empathize with the various stages of motherhood, from birth to bottle-feeding. The ensuing videos went viral.

So, here’s the deal: these guys are all about trying new things. For this series, they called on the help of an OB-GYN, expectant mothers and other experts with tons of experience with the whole “motherhood” thing – and these guys got all the dirty details about being a mom. Then, they headed out to try it.

For part one of the series, these guys strapped on the suspended weight, which simulates fetal movement, and put on the 25-30-pound water bellies, complete with pregnant breasts. Then, they tried to lie down, dress, drive, eat and function while “pregnant.”

The boys weren’t too fond of the whole pregnancy thing, with one even exclaiming, “It’s nice to know that your body wants to destroy you.”

In part four, however, Ned, Keith, Zach and Eugene, really find out just how much the pregnant body wants to “destroy you” when they strapped into labor pain simulation machine to experience the joyful pains of bringing a child into the world. They also spoke with a set of parents, and heard first-hand accounts of the beauty of the cesarean section (when hubby walked in to see his wife’s innards on the surgical room table as the doctor dug around for junior in her open abdomen).

The level one stimulation, which was a mild feeling, had the boys feeling a wee bit uncomfortable. The “moderate pain” of level two had them screaming. The intense pains of level three had one of the boys tapping out, and during the “horrible” sensations of level four, we lost another one. Then came the “unbearable” pain of level five, in which we lost the last two.

In videos two and three, the boys tried their hand at child rearing, as they learned how to change a real baby’s diaper and take care of a “robot child.”

In video five, they were thanking their moms for everything they went through to birth and take care of them.

While we found these videos to be quite hilarious and entertaining, we have to give these boys props. It’s not easy being pregnant, and quite frankly, if it wasn’t for the end result, we probably wouldn’t do it either. These guys went out of their way to empathize with pregnant women, and for that we have to give them – and all men that stand with their ladies as they grow life and give birth – props.

So, Metro Parent readers, what do you have to say about these videos? Did these guys prove a point, or do they make a mockery of pregnancy? Would you ask your man to try pregnancy out?