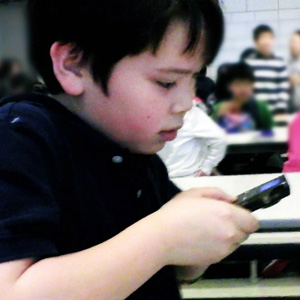 The thought of a middle schooler creating a video about New York City’s public school lunches doesn’t seem like such an appetizing concept. But up-and-coming little filmmaker Zachary Maxwell spins an impressive story line in his film Yuck: A 4th Grader’s Short Documentary About School Lunch.

In his award-winning documentary, the now-5th-grader goes undercover to expose the truth about school lunches that claim to be more palatable and more nutritious than they actually are. He sneaks a video camera into the cafeteria and goes about the whole process Morgan Spurlock style (pretty candidly).

“It sounded like it was coming from the finest restaurant,” Maxwell told ABC News, “but what we were actually getting served, it wasn’t too good.”

Jon, a commenter on the ABC News article, backed up Maxwell’s conclusions about cafeteria food, though, saying, “I work in the public school systems…and this sounds exactly right.”

This spirited documentary has a lot of people in an uproar on both ends of the spectrum, debating whether today’s school lunches are different from what they used to be.

“When I was in school, hot lunches consisted of meals our cafeteria ladies actually cooked themselves,” says Snowmamm, a Yahoo! News article commenter. “Unfortunately, that doesn’t happen today and this young man’s video is an accurate description of school lunches across our nation.”

JT on the Yahoo! News article counters by noting that not all school lunches are “yucky,” but also clarifies that their child attends a Catholic school.

“My 14-year-old daughter has good hot lunches, and they always get a tossed salad, which she loves, and mostly fresh fruit,” JT writes. “Her all time favorite is Salisbury steak with gravy mashed potatoes, green beans, tossed salad, and some kind of fruit.”

We’ve all been there – school can be a drag. I knew lots of kids who even went as far as to compare it to prison. (What can I say? Middle school was dramatic!) But maybe there are some parallels between the two institutions’ meals.

Alfredo commented on the Yahoo! article comparing his experiences. “I went to school in NYC and I went to jail in NYC, and the food was better in jail…”

The courageous Maxwell told ABC News he wants to be “a big-shot filmmaker” when he grows up. With The New York Times dubbing him “the Michael Moore of the grade-school lunchroom,” it looks like he is on the right track.