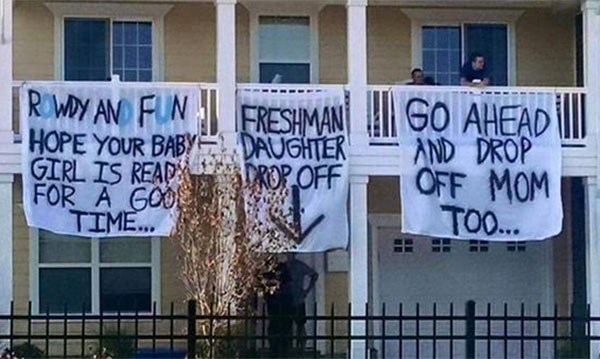 College fraternities are great opportunities for college-aged boys. They promote comradery and provide support to members as they finish their educations. Unfortunately, when you put a bunch of post-pubescent college-aged boys in a house together without any supervision, trouble is bound to happen.

Trouble. That’s exactly what Sigma Nu Fraternity at Old Dominion University in Norfolk, Virginia is in after they hung obscene freshman daughter drop-off signs from their balconies, welcoming freshmen, and their moms, to their house, USA Today reports.

The signs, which were hand-painted on white bed sheets, read, “Rowdy and Fun! Hope your baby girl is ready for a good time,” “Freshman daughter drop off” and “Go ahead and drop off mom too,” greeted all passersby the frat’s off-campus house on 43rd Street.

Outraged over the blatant sexual nature of the signs, the university suspended the fraternity, pending investigation, and the fraternity’s national chapter has come out against the incident.

“While we constantly educate students, faculty and staff about sexual assault and sexual harassment, this incident confirms our collective efforts are still failing to register with some,” University President John Broderick wrote in a Facebook post, “A young lady I talked to earlier today courageously described the true meaning of the hurt this caused. She thought seriously about going back home.”

He continued, saying that the university has a “zero tolerance” policy of sexual assault and sexual harassment, and that the incident will be reviewed and anyone who violated the university’s code of conduct would be disciplined.

Despite the negative reactions from both the fraternity and the university, troves of people have come out of the woodwork backing the fraternity’s action calling it harmless fun blown out of proportion by political correctness.

One USA Today reader, Darren ‘Dee’ Owens wrote, “This is ridiculous. Some young boys being exactly that this is not national news. I don’t think anything is wrong with the signs. This politically correct BS is getting F’n out of hand. Can’t say anything anymore. People need to regrow their backbone. Let’s not act like some of these incoming freshmen aren’t/weren’t fast and loose in high school and now…”

While the signs may have been a joke, we aren’t doing so much laughing here at Metro Parent. This blatant display of disrespect of wives and daughters is disheartening at the very least, and it perpetuates rape cultural at its worst.

We can only hope that these boys will have daughters of their own someday so that they can really see why these signs were so distasteful. And as for the people that support them, this is the 21st century. Times have changed since the ’60s and ’70s when things like this were funny, and you could smoke while pregnant. If you still want these things to be accepted, sorry, but you’ll need a DeLorean that goes over 80.

What say you Metro Parent readers? Was this a tasteless display of rape culture or a joke blown way out of proportion?