Free Pregnancy Tests Will Soon be Available at Alaska Bars 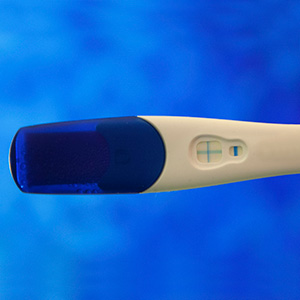 You've got a night of drinking ahead of you, but before you start hitting the bottle, you might want to make sure you're not pregnant. Already out at the bar and don't have access to a test? No worries. Thanks to a new bill in Alaska, patrons of some 20 bars and restaurants will have access to free pregnancy tests.

It's part of a two-year, $400,000 University of Alaska grant-funded effort, the Daily News notes, that "aims to study if posters that warn women against drinking while pregnant work better when pasted on pregnancy test dispensers rather than simply hung on a wall."

The wall dispensers – which are one foot wide, two feet tall and about $800 a pop, the report notes – will be stationed in ladies' rooms. They'll produce free tests that'll cost the state $1.50 each. Condoms, which are not funded by the state, will also be made available at the restrooms where these pregnancy tests are placed.

The tests are part of a "multi-million dollar state effort to prevent birth defects," the Daily News adds, with a goal of distributing 5,000 in one year.

Time will tell if these tests are effective in lowering the rate of fetal alcohol syndrome in Alaska. One thing is for sure: This topic definitely has commenters going crazy.

On the Daily News article, Lillian Taake says, "'Excuse me, waitress! May I have a triple shot of tequila and a beer chaser please? Oh, and by the way, I've had sex with 3 different guys this week so can you get me one of those pregnancy things to use after those 3 shots kick in?' Question: When a woman who suspects she's pregnant or just curious goes to a bar, what comes first, the drinks or the test? How much alcohol does it take to cause the damage?"

Valene Evensen has a different viewpoint completely. "Wow, this is a wonderful idea. Ignorance is bliss, but this tool provides knowledge, and with knowledge women, men – all people have the chance to make that right decision."

So what do you think about this? If Michigan had a high rate of fetal alcohol syndrome, would you be OK with having pregnancy tests in local restaurants and bars?