A Mississippi tween gave the doctor a hand in the birth of her younger brother but while it was a moving experience for her, some parents are calling foul. 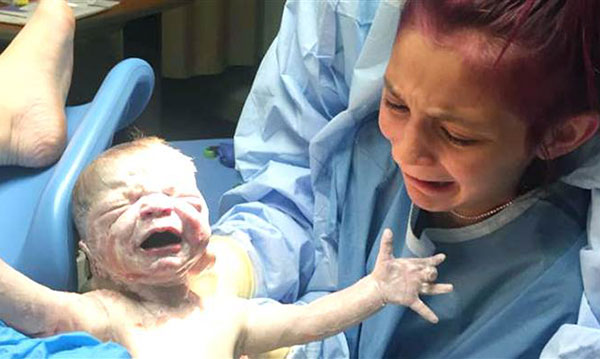 The question dreaded most by parents since the dawn of time: Where do babies come from? Jacee Dellapena, a 12-year-old from Brandon, Mississippi, now knows – with graphic images that are bound to be ingrained in her memory for the rest of her life – firsthand where babies come from.

When Jacee’s mother, Dede Carraway, was preparing to give birth, Jacee asked to be in the delivery room and, after discussing it, Dede and Jacee’s stepfather, Zack Carraway, agreed, Today reports. However, on the day of the delivery Jacee complained she was too short to see anything. So naturally, the doctor invited Jacee to a front-row seat where she’d catch all the action – literally.

“I don’t hide anything from her,” Dede said. “I think that the human body is natural and if she learned about it at school, there’s no reason why she shouldn’t learn about it at home, too.”

This invitation included scrubs and latex gloves as Dr. Walter Wolfe told Jacee to suit up and deliver. Wolfe guided Jacee’s hands as she stood in front of him during the birth, Daily Mail reports.

“I was a nervous wreck. I was nervous and shocked at the same time,” Jacee said. “I was scared I was going to mess up or do something wrong because there are plenty of things you can do wrong.”

Despite her anxiety, Jacee delivered her healthy baby brother Cayson, who weighed in at 7 pounds and 6 ounces.

“It was like, oh my goodness, I just delivered a baby, and it’s my baby brother, and I’m going to tell him when he gets older that I delivered him,” Jacee said. “I can’t wait.”

This story was made public by a Facebook post that quickly went viral and received an influx of responses—both positive and negative.

“Kids learn and become inspired by doing,” Edward commented on the ABC News report. “This may very well be a defining point in this girl’s life.”

“I watched my baby sister’s birth at that age, it was something I’ll never forget, lol, in a good way I mean, it really showed me a good dose of reality, and also the beauty of giving life,” Jillian Dixon said on her comment on Refinery29’s Facebook post.

As expected when people have internet access and a keyboard, some responses were critical of Dede and Zack’s decision.

“I don’t think children should be in the area of surgery especially in labor and delivery,” Yvette Rideaux commented on NBC New York’s Facebook post. “The risk of infection is extremely high. I am not understanding why hospitals are allowing such as a process.”

“Each to their own I guess, not something I would have gone in for, and definitely wouldn’t plaster it across social media for all to see,” Utterlyconfused said in a comment on the Daily Mail article. “Nothing, it seems, is worth privacy these days.”

ABC News reports Jacee now wants to be an OB-GYN when she grows up.

What do you think about Dede and Zack’s decision to include Jacee? Does witnessing the miracle of childbirth have an age restriction?

Photo by Zach Carraway from Today.com.