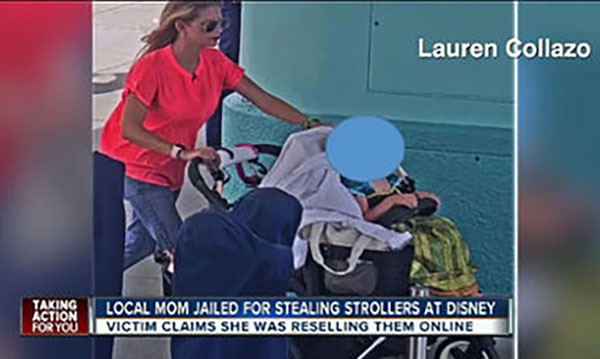 Theme parks are fun … until you’re a parent. Now, those thrilling rides come with rumbly (or upset) little tummies, resort sticker shock and the a few requisite teary meltdowns. But it’s all worth it for the memories, right?

Still, one Florida mom had more reason to complain than most: during her family’s mid-April trip to Disney World, another mom ran off with some very valuable possessions.

What was supposed to be a light-spirited day in the happiest place on earth quickly turned sour when Lauren Collazo dis-boarded a ride in Hollywood Studios – only to find her $1,800 Bugaboo stroller had been stolen.

Not only did the perp, Tampa Bay-area mother Michelle Craig, pull the brazen heist in broad daylight, but she used her own young daughter as a decoy, reports Local 8 WVLT TV in Tennessee, popping the child in the stroller and taking off.

Collazo’s keys and wallet were still on board – along with her niece’s EpiPen – so the family was stuck in the Magic Kingdom, penniless and with no hope of escape, Collazo told ABC Action News. Like a true Prince Charming, Collazo’s husband came to the rescue and boarded the first flight from Miami to save his damsel – and the kiddos – in distress.

Naturally, news of this Disney villain went viral, thanks to a surveillance photo of Craig released by theme park. From there, Orange County detectives issued a warrant for her arrest, ABC reports.

Luckily, Callazo had a fairy godmother: A Texas woman bought the stroller from Craig online, ABC notes, and, upon realizing who it belonged to, contacted Collazo and returned the carriage to its rightful owner.

And it turns out Craig’s Facebook page was littered with high-end strollers, purse and diaper bags for sale. She just recently turned herself into the Hernando County Sheriff’s Office and is now facing a grand theft charge.

“It’s time to find a different job and a different hobby that’s not stealing from other moms and ruining families’ days,” Collazo said in the ABC report.

Happy endings all around – the protagonist was justified and the antagonist was served justice. A fairytale in the Magic Kingdom, who’d have guessed it?

What are some helpful tips you have for ensuring stress-free family amusement park days? Let us know in the comments below.