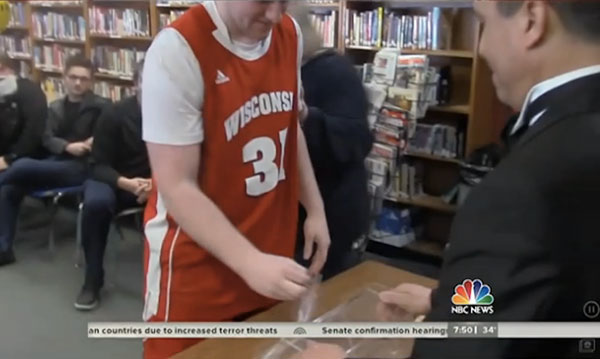 Did the thought of asking someone to prom make your stomach turn back in the day? Well, students at Aquin High School in Freeport, Illinois aren’t worried a bit.

Since 1926, the school has collected student’s names for an annual lottery come prom season. Aquin is a Catholic school, and this whole shebang came about to include students from a nearby orphanage who otherwise would not be able to attend prom.

The boys draw their date’s in the library on the big day, and then put on a skit/performance for the girls to reveal their dates.

Since then, these students’ prom dates come by the luck of the draw, and before you start feeling sorry for anyone, the students love the tradition.

Junior Maggie Bald told ScaryMommy.com there are less than 100 students in the school and everyone knows one another’s names, so the prospect of getting paired up with a possibly creepy stranger is a non-issue.

Plus, Bald is a pro at the process. Her name was pulled as a sophomore, which is what happens when there’s an odd number of students prepping for prom.

“It doesn’t matter who draws which name,” she says. “We get along with everyone, since 90 percent of us have been going to school together since kindergarten, we are very close.”

If students have a significant other, they still recognize the ruling of the lottery. At Aquin, prom is more so a group activity, and not the hyped up, glitzy and often-romanticized event most high schoolers are acquainted with.

Naturally, when this story started to circulate, social media users chimed in.

“This is worse than the ‘everyone gets a trophy,'” tweeted user Katie Gjerde. “We have to quit protecting our kids from failure! Failure is how they learn.”

Many outsiders had questions.

“What if a girl wants to go with a girl? Why does the girl ‘have to accept?’ A girl should never have to ‘accept’ anything from a man,” tweeted user @Kaconover27.

Valerie Williams of ScaryMommy.com also brought up a bundle of questions and points about the tradition.

“There’s also the fact that this video shoes the boys high-fiving each other after drawing and announcing their date’s name,” Williams writes. “Something about that feels gross, as though the girls are prizes with some kind of value.”

Yet, with every concern or question, was a response from an Aquin High School student backing up the lottery with praise for the process. Per Twitter user Renee barr, or @rlbarr311, this seems like a quirky one-of-a-kind tradition that has lasted so long for a reason.

“It’s not for every school, but this one has a 90 year tradition continued with student & community pride & support #gobulldawgs.”

Every year, the Aquin High School asks their students if they want to keep it up. And they haven’t said ‘no’ yet.

What do you think of this school’s tradition? Would you like to see other school adopt it? Tell us in comments.