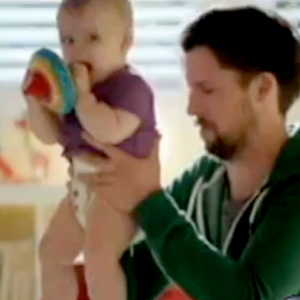 Doofus dads may have been advertising gold in days of yore. But today's progressive papas aren't LOLing about being the "butt" of this diaper joke.

We're referring, of course, to an ill-fated commercial in the new "Have Dad Put Huggies to the Test" ad campaign. In a snippet of the spot show in an ABC News story, a voiceover says, "To prove that Huggies diapers and wipes can handle anything, we put them to the toughest test imaginable: Dads." Moms are seen marching out the door, presumably for a "much-needed break," passing off cherubic babies to the guys. You know what's next. The dads scramble around, slapstick style. Bowls of spaghetti fly. And, of course, the dudes make befuddled, grossed-out faces at the prospect of swapping – even sniffing – Junior's dirty diapers.

"How did Huggies products hold up to daddyhood?" the voiceover asks. It's not quite Three Men and a Baby, but you get the picture.

And, in almost no time, fathers across the blogosphere were crying foul.

"How are dads a test? As a dad, am I simply too dumb to use (wipes and diapers) properly?" Those are words from Chris Routly – the Pennsylvania SAHD of two young boys who blogs at DaddyDoctrines.com. It fired him up so much, in fact, that he created a Change.org campaign called "We're Dads, Huggies. Not Dummies," calling on the brand to change its tune. After all, he points out, one-third of fathers with working wives are regularly caring for their kids, according to the latest 2010 U.S. Census. Not only that, but Huggies was soliciting home videos of everyday dads trying to maneuver diaper changes with Huggies products.

"The days of dad being unwilling or unable to take an active role in even the messiest aspects of parenting young children are past," Routly says. "Why not… celebrate dads in a way that doesn't minimize, stereotype and judge us as – at best – well-meaning but second-class parents?"

To its credit, parent company Kimberly-Clark wasted no time trying to patch up its humor fail.

In fact, you'll be hard-pressed to find the original full version now. That's because, shortly after popping up on Huggies' Facebook wall a few weeks ago, it was pulled – with a profuse apologies.

Not that that's sounded the death knell for the campaign. Rather, it seems Huggies took Routly's advice to heart, creating a warm 'n fuzzy redo where dads are lovingly rocking and cradling their little babies.

That was apparently the goal all along, said a Huggies rep named Erik who, in a wall post, identified himself as "responsible for the Huggies advertising you are seeing." Namely? "We intended to break out of stereotypes by showing that dads have an opinion on product performance just as much as moms do."

Uh, sure. But it does seem like Huggies is getting it. "A fact of real life is that dads care for their kids just as much as moms do," adds Erik, who also says he is a dad of three young kids, "and in some cases are the only caregivers."

"As a father who cares very deeply for my daughters," writes Dave Ayers, "I find this very insulting and will NEVER recommend your diapers. Very bad form!"

Dad Ben Bedgood adds, "I hope your PR department is having some sleepless nights right now – you know, the kind that I had when my 1 1/2 year old had bronchitis. Good luck trying to put this fire out, Huggies."

But then, you'll find plenty of hearts, hugs and "cute commercials" and "lighten up" love, too – along with non-ad related complaints about pricey and leaky diapers. Back to business?

Brought to you by Healing Haven.
Read more
You