'I Hate My Thighs' Onesie Removed from University Bookstore 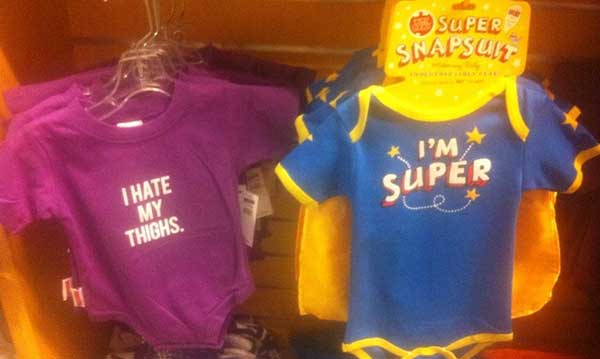 One college faced big backlash over something it was selling in the university bookstore. The folks at New York University’s bookstore thought it would be cool to sell a purple onesie for little girls that read, “I Hate My Thighs.”

According to Upworthy.com, a guy named Jason Y. Evans – who works at NYU – noticed the “disturbing baby gear” while he was browsing the bookstore. So, he snapped a photo of the onesie, which is positioned next to a blue (likely for boys) onesie that says, “I’m Super.”

He posted the pic to his Facebook page – with this caption: “I had a very difficult time not raging out about this in the college store. These are onesies … for infants … guess which one is for girls and which one is for boys. THIS is the problem.”

The post went viral, Buzzfeed reports, and people went crazy. And, it turns out that social media does do some good. The onesies were removed from the bookstore and NYU Bookstores even issued a response directly to one of the Facebook commenters, saying that it was an oversight on their part.

The onesie is made by Wry Baby, which is also sells onesies that say, “Love Me for My Leg Rolls” and “Silently Judging You.” Clearly, the company likes to manufacturer silly graphic onesies, but the thigh one is a bit much. Why start body issues from so young? I know it’s supposed to be a joke, but why even go there with little girls? As women, we deal with so many unrealistic expectations of the perfect body. There’s absolutely no reason to put that on our little girls.

I’m so glad to see that a man was disgusted enough by the onesie to post about it, and that from there, the post went viral. This is a social media win.

If you want to join the fight to help end gun violence, start with these organizations.
Read more
At Home