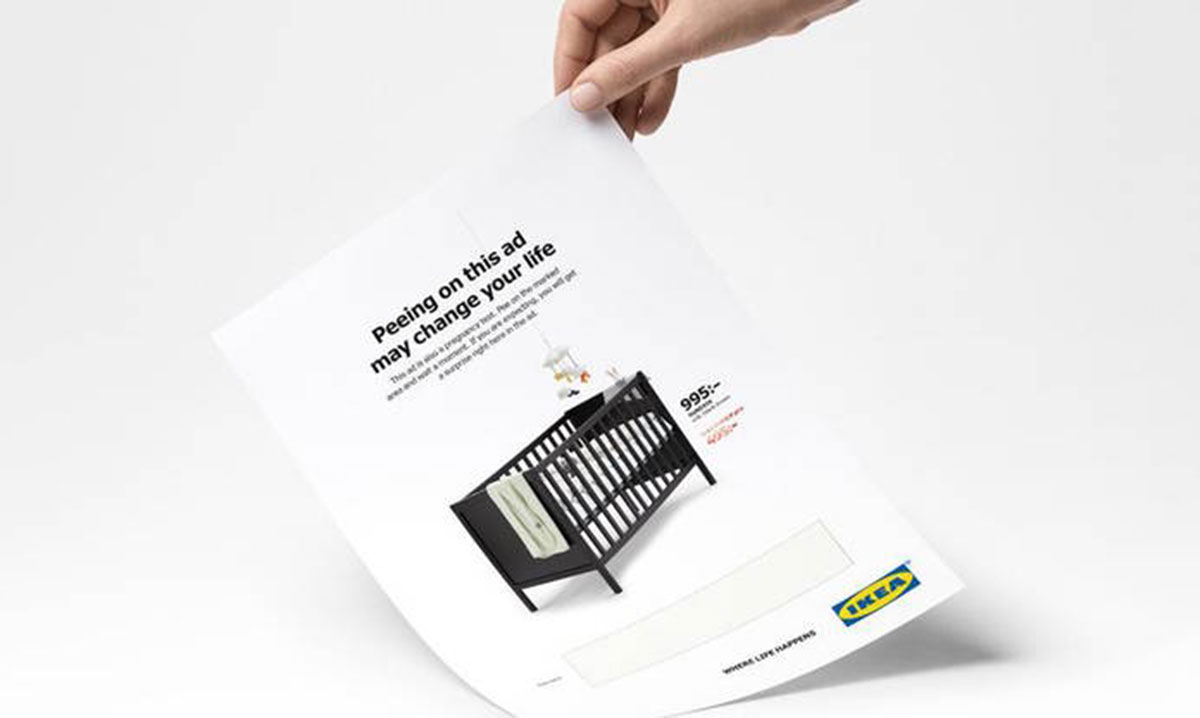 People will seriously do anything to save a buck. I mean, TLC even made a show, Extreme Cheapskates, which depicted the lives of people who would re-use someone else’s discarded popcorn bag at the movies to get free popcorn and eat road kill so they didn’t have to splurge on a main course.

Those examples are a bit far-out but to each his (or her) own, I suppose. Personally, my mantra is “you can’t take the money with you” and as long as you have a bit of cushion to fall back on, there’s really no harm in splurging responsibly.

Still, the opportunity to save some dough is strong with some, and that’s why I’m not really shocked by this new IKEA ad that asks for pregnant woman to pee on it to reveal a discount for a crib.

Yeah, you read that right. The Swedish furniture store, IKEA (which I love, by the way) ran an ad that read, “Peeing on the ad may change your life,” with a picture of a crib and a large box at the bottom.

The ad works exactly like a pregnancy test. You pee in the box, which tests for antibodies that are attached to the pregnancy hormone, Adweek reports. If the hormone is detected, the deal pops up – and if you’re not pregnant, nothing happens and you’re stuck hovering over the toilet wondering why you just peed on your magazine.

The idea was to make the ads a bit more interactive for readers but it seems to me that it misses one very crucial detail – how in the H-E-double hockey sticks is a woman, who is far enough in her pregnancy to be crib shopping, going to situate herself on a toilet to pee on the ad?

I mean, maybe all the women in my life are just major procrastinators or something but the vast majority them didn’t start crib shopping well into their second trimesters, maybe even into their third, and by that time they were very pregnant.

And let’s be real, pregnant women can barely see their feet so how are they going to hover over a toilet and hit a specific part of a magazine without peeing all over their hands, legs and floor – I guess maybe it could be dabbed, dropped or smeared on but you’re still asking her to hit a target, or stick her hands in the toilet bowl.

I love that IKEA was trying to appeal to expecting moms, though. After all, kids aren’t cheap and any little bit helps, but maybe the next time you consider a pee-on baby gear ad consider a pregnant woman’s changing body and how she would have to go about hitting the mark.

So, Metro Parent readers, what do you think of this ad? Is it genius or does it forget to take baby bumps into account? Let us know in the comments.